Samantha Irby: a public reading celebrating the re-release of Meaty

Kalamazoo, Michigan is a liberal college town. It’s produced great writers such as Darrin Doyle, Jaimy Gordon, Bonnie Jo Campbell, and Elizabeth Crane. The city’s independent book store, The Bookbug, hosted Samantha Irby to read from her re-released book, Meaty, and answer audience questions. The writer, who is originally from Chicago, now lives in Kalamazoo because she met a woman on Twitter, got married, and moved there to live with her wife. 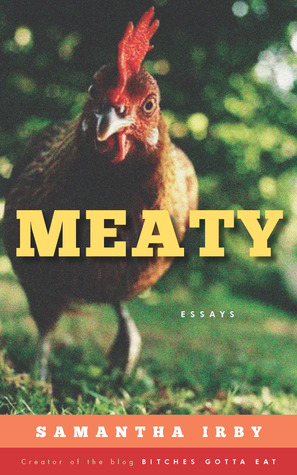 Irby claims she’s “sweating her way across America” for this book tour. Because she mentioned a few times how uncomfortable she is with photos of her that pop up on the internet, I didn’t take any out of respect for her implied dissent. Irby switched which essay she wanted to read to the audience on the fly once she noticed a child in the audience because “it is only proper that a child learn about anal sex from their mother,” not from her. The author preferred to sit during her reading, and she had a big comfy chair. She is there to work and promote her book, why shouldn’t she be as comfortable as the audience? I hadn’t thought about requesting comfort like this until I read about it in an essay by Roxane Gay.

With some writers, you can tell when they switch to Reading Mode. It’s like they have a rehearsed voice for a specific story and you are listening to an audiobook as rendered from the practiced memory of the writer. In Irby’s case, she writes with her own voice, so she reads from her own voice, which was as refreshing as it was hilarious and authentic.

Here’s what I learned from the Q & A:

Surprisingly, Irby never promoted her blog, Bitches Gotta Eat. Her friends would sometimes read it, and it eventually got a lot of followers. She originally started her blog to impress a guy, but that didn’t work out.

Irby wasn’t worried about her future or current employment when she started her blog (on which she over-shares) because if they don’t like what she has to say, that job isn’t for her.

People think she’s Roxane Gay even though their writing is nothing alike. Nor do they look alike. 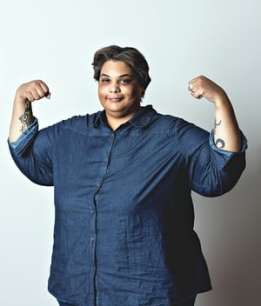 Meaty is being optioned for a TV show. Irby gets frustrated collaborating because most of the people telling her what to do are her age or younger, but she’s the type of person to not fight for her opinion. She said she felt this way even when she worked with Roxane Gay on an essay collection that’s forthcoming.

She worked in an animal hospital for 14 years, but claims she is really lazy and has to keep writing because she’s so lazy. 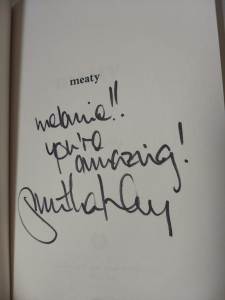 Her lawyer said she can write about anyone and use their real name in her essays because it’s her experience, too. The only catch is no outing someone on something that’s obviously a secret, such as having a disease, for example.

The child in the audience did asked Irby a couple of questions about becoming a writer that are common, such as how does one become a writer. Irby’s response: that she just fell in to it, that the child should in no way emulate her, and that she is too lazy to do anything else.

Check out my review of Meaty! I’ll be reading and reviewing We Are Never Meeting in Real Life later this summer.