We Are Never Meeting in Real Life by Samantha Irby

In July of this year, I read and reviewed Meaty by Samantha Irby, which was originally published in 2003, but got polished up and re-released by Vintage Books (an imprint of Penguin Random House) in 2013. In 2017, the same press published her follow-up collection of essays, We Are Never Meeting in Real Life. Readers, myself included, think this title is funny because some of us have met Irby. Funny truth: a couple of months after that public reading, I returned to the bookstore and found this on the bathroom wall:

With 14 years between writing her first and second essay collections, I found Irby’s content to be richer, more meaningful, even when on the surface it wouldn’t appear that way. Of course, Irby is still funny. She acknowledges how carefully she crafts her humor in her writing. In a moment of dark humor, Irby imagines her death. How would a woman who eats and lives on survival mode and loves TV more than anything else be found?

I would be dead in my fancy black robe, tits splayed, tomato sauce congealed in the corners of my mouth as Netflix asks judgmentally, “Are you still watching this?”

Even simple moments that demonstrate how Irby, who is now 38, is different from other women. The most obvious is that she is childless, a detail that causes her to lament changed relationships with her friends, “because that baby might be sleeping or eating or doing its taxes, and you are going to mess it all up with your loud, single-person bullshit.” While we’ve all heard about what it’s like to be “behind” in life compared to our friends, Irby adds in a little something — doing taxes — to make the conversation feel funny.

While I don’t think Irby ever wanted children, she does mention she is unable to have children. Here is where the essays reach deeper. After Irby recounts a man named Fred with whom she was very much in love, I was struck cold by his ableist comment:

I tuned back in as he was saying, so fucking gently, “. . . can you really chase a baby around the backyard?” He didn’t mean it in the mean way, I don’t think. Sometimes even when it feels mean it isn’t, I reminded myself. I glanced down at my left hand, curled in a stiff black brace, my feet in their orthopedic sandals.

Even now, as I type this quote, my stomach clenches and I feel sad and sick. I wear hearing aids and can’t see well, among other things. That sadness she endured in that moment with Fred really spoke to me.

In her previous book, the most sad and emotional she got was when she described how her parents — mother 40, father 50 when she was born — got divorced and both physically deteriorated. Her mother became chronically ill, so Irby became the caretaker in high school. She hid her situation from authorities so her mother wouldn’t be taken away. Her father, a homeless alcoholic, was mostly absent from Meaty.

In We Are Never Meeting in Real Life, Irby’s father returns, this time to convince her mother to leave a nursing home because he’s trying to get the $900 the state pays for nursing home rent. Despite protests by Samantha Irby, her mother leaves with her father. He immediately gambles away the money, leaving his ex-wife with no feeding tube, nurses, or occupational therapy. Irby writes about her parents honestly, clearly, and without making them look better than the choices they made.

Lastly, it’s not very common that I relate to anyone in books. Fat characters aren’t terribly well-written, and I have a mishmash of likes that don’t line up to any stereotype, so I don’t expect to see me. *Surprise!* I got this, a mishmash of fat, loves Metallica, hates workout room TV:

Working out is a bummer. Walking on a treadmill for forty-five minutes while listening to the same Metallica playlist over and over and trying to read the closed captioning of a television show you don’t even care about is a total drag.

Then there was an even more surprising moment to which I related: Irby describes how she never drinks juice. She doesn’t even go into the juice aisle. Juice is basically like drinking a soda because you killed all the health benefits by turning the fruit into, well, juice. Instead, it’s more about saving those calories for something “like a slice of the birthday cake that was half-price because little Timmy’s parents never picked it up.” I about died laughing here. I know what she means, I am an anti-juice crusader myself, AND I’ve eaten that on-sale single slice that reads “PPY DAY” because the grocery store diced up a sheet cake. While I never expect a book to be “relatable,” and I definitely side-eye people who bag on books that didn’t “relate to them,” it was also fun to see myself in someone else and on a page.

I can’t wait to read more Irby, and I continue to follow her blog, Bitches Gotta Eat. Despite the title of this collection, Irby was charming at the reading. Is it a technique? She did write this in We Are Never Meeting in Real Life:

. . . but if your mom comes up to me at a reading, then I’m going to look deep into her eyes and say, “You look amazing in magenta, Margaret,” without breaking my gaze, and she is going to swoon and buy six copies of my book and, duh, love me forever.

What kind of jerk would fall for that? 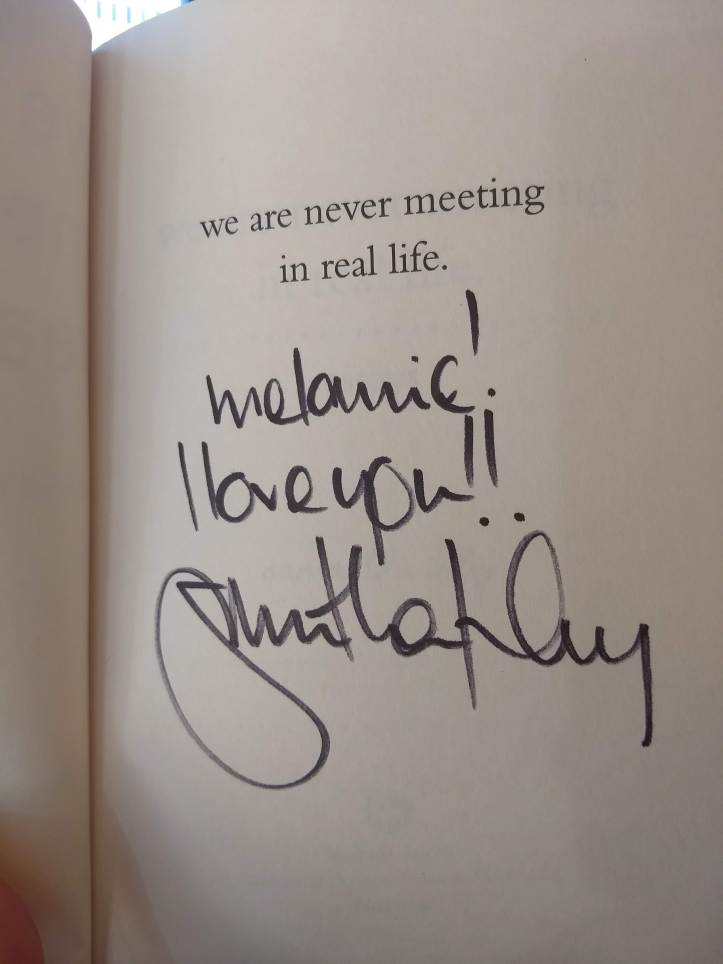