No Bed of Roses: an Autobiography by Joan Fontaine

I was just dying to get my hands on No Bed of Roses, Joan Fontaine’s autobiography. I loved her as the highly expressive “second Mrs. de Winter” in Alfred Hitchcock’s Rebecca, and she was lovely in Suspicion, too. The book has several pages of old photos. Here are some images (not from the book) of Joan Fontaine in Rebecca: 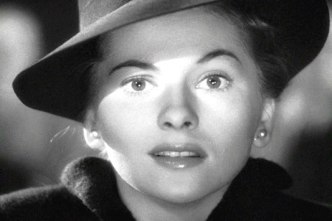 Fontaine opens No Bed of Roses with an introduction in which she explains why she wrote her autobiography. She claims many people reported on her life and career inaccurately in the media and that “someone had to set the record straight.” Joan Fontaine was born Joan de Beauvoir de Havilland on October 22, 1917. She changed her name to Fontaine, which was her step-father’s last name, because her sister Olivia became a famous actress first and Hollywood couldn’t have two de Havillands. Olivia and Joan were born 15 months apart, and Joan suggests theirs was a fierce rivalry. Of course, Joan felt that she was the victim throughout. When describing their differences, Fontaine refers to herself in the 3rd person. For example, “Obedient Joan now walks in a permanent ballet fifth position, while defiant Olivia’s toes point straight ahead.”

Throughout her life, Fontaine was married four times and had been engaged many more times. She basically had a 5th husband but didn’t put it on paper. Many of these marriages began months after initially meeting, and I wondered why. Then, I realized Fontaine was criticized in the media or was threatened with losing custody of her daughter if she had a man in her house who wasn’t her husband. After golfing, Fontaine was asked “What’s your handicap?” to which she responded “Men.”

Fontaine had a worrisome childhood. Her step-father sent her to school in handcuffs because she wouldn’t stop biting her nails. The same man washed her too intimately when Fontaine’s mother was absent for all of 1924. When she was twenty, she became acquainted with a much older actor on whom she’d had a crush as a girl. Fontaine’s mother pushed the relationship, letting Joan travel with him, though they stayed in separate rooms. One night, she claims he “threw back my bedcovers, and before I could protest, the dire deed was done. One might say I was surprised out of my virginity.”

As sister Olivia’s fame rose, Joan Fontaine was told to serve dinner to Olivia’s guests and then stay in her room. Both sisters were born in Japan, and when Joan is sent to her father, who still lived there, she claims she was ignored there too. Yet, her argument that her Japanese step-mother was terrible is far from convincing. It’s still the fact that a British family had children in Japan and the mother relocated to California while the father stayed in Japan that is difficult. These such moments touched my heart and gave me an idea of why Fontaine seems to stumble through adulthood.

I was largely disappointed by No Bed of Roses. Fontaine seems removed from reality. When she was pregnant with her daughter, Fontaine and her husband chose to remodel to create a nursery. Therefore, her husband sent her to live in a hotel suite for a few months. Fontaine complains that her mother had traveled away, her sister was with her husband, and Fontaine’s husband was too busy with business meetings. Thus, she was left “alone to cope with room service.” Imagine the most challenging part of your pregnancy is calling and opening the door for room service.

Near the end of the memoir, Fontaine has a recurring illness that prevents her from working. Meanwhile, she fights to win custody of her daughter in court, which leads to her running low on money. On the next page, Fontaine has landed a role in a play, been paid, and bought her latest husband a Thunderbird for Christmas. She’s displeased that he buys her a frying pan. Maybe he was more money conscious, Joan? The autobiography is sprinkled with such frustrating moments that prevent me from sympathizing with Fontaine when things are challenging.

However, the biggest flaw of No Bed of Roses is the name dropping, much of which left this reader skimming. We’re talking old actors. Fontaine was born in 1917, and most of her friends and co-workers were her age or older, so not really people I know. Oddly, there is little discussion of what it was like working with certain directors or actors. My beloved Rebecca is a four-page chapter! And in that chapter, Fontaine claims that Laurence Olivier wanted his fiance to play the second Mrs. de Winter, so he was a pill. Then, because the other actors — including Gladys Cooper, Judith Anderson, Nigel Bruce, and George Saunders — were older, they would talk about the “good old days” and leave out the twenty-one year old Joan. Mainly, in the “Rebecca” chapter, she complained about her co-stars and then listed all the non-British people in Hollywood who were cliquey with the British Hollywood people. The movie Suspicion, for which Fontaine earned an Academy Award, doesn’t even get a chapter.

Joan Fontaine presents herself as a nervous woman who needs validation and wants everyone to love her, and the result is more of a phone book of Hollywood’s elite. Most unprofessionally, Fontaine complains about people by name, such as when she said Laurence Olivier’s fiance never cleaned her litter boxes, so the house stank. Fortunately, I was able to separate Joan Fontaine from the second Mrs. de Winter and shall keep my happy memories of the film and leave Fontaine’s personality in the pages of this book — which I’m about to donate.