Content Warning: there is some lightheartedness around an instance when one character has a roofie slipped into her drink (she is not assaulted), which struck me as inappropriate and didn’t mirror the tone or content of the rest of the novel at all.

The following book has been selected as part of my search to find positive representations of folks who identify as fat women in fiction, nonfiction, or poetry. That positive representation will not hinge on the character being miserable and then happy after losing weight or falling in love. Characters can lose weight or fall in love, but it is not the catalyst for their happiness. I also will not recommend books in which the character pulls her body apart (I call this the “chicken dinner”) and criticize pieces.

Thus, books will either meet or not meet my criteria, which will factor overall into my recommendations. I purposely use the word “fat” because it is not a bad word. Using plump, curvy, plus-sized, fluffy, big-boned, shapely, voluptuous, or any other term suggests that fat is bad and thus needs a euphemism. 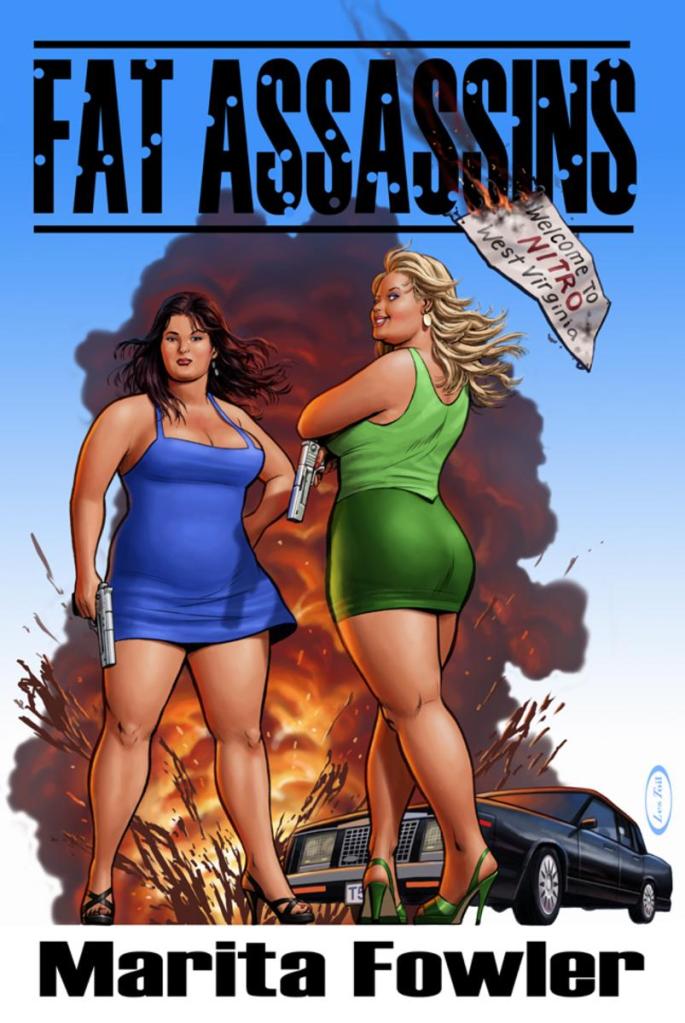 Fat Assassins was self-published by Marita Fowler in 2011. It’s the story of two women in their early 20s who live in Nitro, West Virginia, and have been best friends since 3rd grade. To the best of my knowledge, Fat Assassins takes place around 2008. The heroines, Shasta and Ulyssa, share a mobile home. But one horrible day, both women are out of a job  — one from Wal-Mart and the other from a construction company — for unjust reasons. They try to get new jobs in a town that has almost no work that isn’t shady when they read an add for an exterminator gig at a strip club. Shasta and Ulyssa are running out of money, so they decide to stretch the truth and say they have experience killing pests. A conversation in their car before the interview reveals how woefully naive, yet hilarious, they are:

“Yeah, I wonder if they have insurance in case one of the dancers gets bit? Imagine sitting there getting ready for the show wearing nothing but feathers and tassels,” Ulyssa said, twirling her fingers in circles by her boobs for emphasis, ” . . . and BAM! A squirrel bites a boob!”

We both shuddered thinking about a crazed squirrel swinging by the teeth from our boobs.

“Ouch! Don’t forget they carry diseases too? That would doubly suck! Getting a squirrel bite and a rabies shot in the boob! I hate squirrels!” I said.

“What if there are squirrels in the parking lot right now just waiting to attack us for our boob jerky? Maybe they’re circling the car looking for a way in . . .”

And through a misunderstanding of coded language, our heroines end up working for a gangster who wants a man killed. The rest of the book is their attempts to actually kill him, justifying their choice because he’s a bad person. And, well, it couldn’t be any worse than hitting a deer with your truck.

The world building of Nitro, West Virginia, is incredible. The things people say and the way they think reminded me of my own roots in central Michigan, but were taken to the extreme, because what is WV if not extreme? Readers are introduced to “tourist fishing,” which means there is a road that leads directly into a lake, but current GPS doesn’t note the lake. People from out of town drive right into the lake because they follow their GPS blindly, and the local tow truck/autogarage/used car business owner sits on a couch by the lake waiting for such people — and offers them a tow and to fix their vehicle.

There’s also the example familiar to Mid-westerners regarding deer season: there’s deer season, then there’s “don’t get caught season.” Of course, those who kill deer may not use a rifle or bow; they may just keep the deer they hit with their trucks.

While the book isn’t conservative, readers are reminded that everyone is a Republican when Ulyssa takes an oath:

“If I break this oath, I will suffer the justice of my Hillbilly ancestors and my trailer will fall off the blocks. And Shasta can put a Democrat sign in my front yard.”

Marita Fowler weaves the world building into the story itself, never pausing to info-dump on the reader and take them out of the story. Even some of the word choices, such as a guy who accidentally says “applediziacs” instead of “aphrodisiac,” reminds readers of they type of town in which Fat Assassins is set.

Furthermore, Fowler doesn’t make this novel about Shasta’s and Ulyssa’s fat bodies. The information is woven into the text. There are mentions of feeling “desperate” for Dairy Queen, wanting M&M’s because one is in a “salty-sweet mood,” feeling excited about doing dangerous work and thus wanting a “pint of New York Superfudge Chunk,” getting whipped cream on hot chocolate, ordering lattes at Starbucks without making them reduced cal/fat/sugar, or packing Little Debbie’s for a road trip. These food moments are ones we tend to see connected with shaming people, or the purchase of these types of food lead to immediate explanation and/or apology from the purchaser.

The world makes space for these fat characters, too. When Shasta feels nervous about a ride at the fair due to her size, an employee kindly tells her to take the seat on a certain part of the ride because it’s roomier. No apologies, no fat shaming. There are a few instances when other characters make remarks, but Fowler makes clear these are petty, mean people.

If you’re reading this, I hope you support the author. A Kindle copy of Fat Assassins is $0.99 right now on Amazon (and the same on Amazon U.K.). Fat Bodyguards, the next book, which I will read in March, is also $0.99. I cannot wait to read it! When I looked for Marita Fowler online to tell her how much I loved, laughed at, and appreciated Fat Assassins, I soon learned that her online presence dropped off in 2014, even though she had revealed a cover for a third book, Fat Spies! Where is Fat Spies, I wondered. It’s not for sale! Being a little unethical, I stalked around until I found one Marita Fowler on Facebook and messaged her. It was her, you guys! I told her how I felt about Fat Assassins, and she wrote back: “Your msg today made me smile and motivated me to get back to the keyboard.” Fat Spies, here we come?

Leave a Reply to Grab the Lapels Cancel reply