Today, Grab the Lapels welcomes Jodi Paloni to the Meet the Writer series. I’ve asked Jodi questions about her two very different graduate degrees — one in environmental studies and the other in creative writing — and you read about how poetry may serve a purpose to the poet, but doesn’t have to be published to have meaning. Read more about Jodi Paloni at her website; at the bottom of her site are numerous ways to connect with her on social media.

Jodi Paloni: I mostly write realistic fiction. I’ve published a collection of short stories and a number of other stories in lit journals on-line and in print, and I’m currently working on a novel, which is hard work, but very exciting. I love to read fiction and find that getting lost in a story provides both solace and wisdom. Novels provide me with an escape like nothing else. I want to make what I love, so I write.

But when I began to write in earnest — to actually put words on paper, look them over, work on them — it was October 2001 and I was writing poetry. My first marriage was unraveling and the Twin Towers had just fallen. The poetry teacher at the school where I taught held a workshop for anyone who wanted to come and process the national tragedy through writing. My oldest daughter had been born on September 11, 1993. She was eight when the towers burned down and troubled that something like that had happened on her birthday. I wrote my first poem about her, in celebration of her coming to be. It’s still my favorite poem of the hundred and fifty or so that I have written since.

But I don’t publish poems. I keep them private, like one would a journal. Some day I’d like to pull all of my poems out and take another look at them, along with the dozen or more I’ve written in the last few years. If I find something I like, I might start sending them out. I think it would be nice to have an artifact, a chapbook or a book, that embodies the work. Poetry, to me, is the distillation of a moment, a feeling, or an experience.

My poems are mostly about the natural world as a mirror into my interior life. In troubling times, writing and reading poetry is a balm, so I tend to turn towards poetry to process emotion. I also turn to poetry when I am moved by beauty. It’s an impulse. Writing fiction is more of a strategic process for me. I get to use the parts of my brain that are both generative and tactical. It’s like figuring out a logic puzzle: the brain expands beyond the boundaries of normal thought, but is also thoughtful about boundaries. I have to say, though, all forms of writing, even writing answers to these questions, is what I want to be doing most of my time. 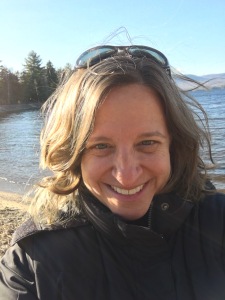 GTL: What is a graduate degree in Environmental Communications at Antioch all about? And did that degree affect your time spent in an MFA program at Vermont College?

JP: I haven’t thought about that degree for in a long time, but recently, at an Earth Day brunch, I found myself reflecting on my time at Antioch with great nostalgia. I earned that first masters in 1990 (wow!) almost thirty years ago.

I had gotten my bachelors degree in education in the early eighties, but didn’t love the idea of working in a classroom. I wanted to be outdoors, exploring the natural world, enjoying it and working to advocate for it. After a few years of teaching in environmental jobs, I decided to indulge myself in environmental study. I say indulge because a lot of the classes were held outdoors. I learned how to identify flowers, trees, and birds. I took one class called, Mammals of the Subnivean Zone, a study of the little furry creatures that stay alive all winter underneath the snow. I learned tracking. I saw Snowy Owls. I was in heaven. The communications part of the degree was about writing, and I read wonderful nature essays along the way, but mostly, it was about how to bring ideas we learned to others in the form of advocacy and policy.

In the end, I went back into teaching. I found a wonderful public school in Vermont where both place-based learning and literature was highly valued. I could learn and explore new ideas along with my students. I wrote poetry at night, after my own children were asleep. I dreamed of writing a novel and would sometimes lay awake writing scenes in my head.

I guess all of this it to say, I have two great passions, the outdoor world and stories about regular people. Earning masters degrees in both environmental studies and fiction was really an opportunity to immerse in what I love.

JP: I wanted to be a stage actress or a famous singer, a Joni Mitchell, a Stevie Nicks, a Carol King. I loved the stories the ballads told, and the rhythms, and I loved to sing. Plays and movies were just another form of the storytelling. Ha! I guess writing fiction allows me to wear the mask of my characters and become what they are on the page, so in a way, that is a form of acting — taking on someone else’s voice, imagining how they would gesture or move across their exterior backdrop. Poetry is akin to song lyrics. It’s musical, all about sound, too. Fantastic! I got to become what I wanted to be when I grew up, just not in the way I might have imagined.

GTL: What inspired you to write They Could Live With Themselves?

JP: They Could Live With Themselves is a collection of linked stories about a small town in New England, based loosely on the small Vermont town where I lived for twenty-five years. My interactions with my neighbors and the landscape inspired me, for sure, and other stories I read, too. I pay attention to certain things­­ — nuances between people in a public place, gestures, objects, and am taken by a particular visual moment.

That visual moment is what I usually begin with — a lanky boy mowing a lawn, three teenage girls glommed together on a park bench, a pregnant woman sitting on a curb. I don’t write any notes or make a conscious effort to sit down and write about what I’ve just seen. The images just get stored in my brain.

I often begin a story when a first line comes to me, and I riff on that. Later, I’ll see something in a story that is a knock-off of an image in real life or one from a daydream. I love the mystery of how it all works. Once I had written a dozen or so stories that took place in the same town and found that characters were popping in and out of each other’s stories, I began to think of the ways I could do this with intention, and plan how the stories could be arrange in a linked form to give a novel-like experience of the read, while maintaining each story as a discrete piece. The stories take place over the course of one year, from May to May, in a small town. Readers can watch the evolution of the community as a character, too. It was fun.

GTL: Many times writers find a creative niche and community. What do you think is yours?

JP: I have a writing group that traverses place. We use Google Hang Out. We’ve met once a month, almost religiously, for six years. I also am very involved in my local writing community and the statewide alliance in Maine, which is fabulous, very active, and quite generous in spirit. I have to say, most of my friends are writers, or at least avid readers. We talk a lot about our lives as it relates to writing and books. I go to a few writing events a year, a conference or a residency. I’m currently in a poetry group and just joined two new prose groups, probably too many groups, but we’ll see. I do love spending a Sunday afternoon with three other writers discussing the work. Most of my social media connections are with writers as well, so I’m basically surrounded with writers and craft talk, books and publishing news. Works for me!

GTL: If you could change places for a day with any one of your characters, who would it be, and why?

JP: Oh, wow! Great question, a tough one, too. Let’s see. A lot of my characters are pretty sad, and for good reason. I don’t want to be any sadder than I already am in real life, or as sad as some of them. Ha! Oh, dear. But just for one day, right? I like a character named Wren, a lot. She’s a single woman in her forties. Although she has had very sad events in her life, going as far back to a childhood, she seems to be on the mend. She’s figured out that it’s okay for her to be there for others and still find ways to take care of herself, to make peace with the fact that she actually likes living alone, and, I think, though I’m not absolutely sure, she’s about to hook up with someone who could become the great love of her life, a man named Addison, who lives in a fabulous Vermont homestead high on a hill overlooking the valley. Sure, I’ll be Wren for a day. I’ll pick a lovely spring morning when the sun is hot, but there’s still a hint of melting snow. The stream is rushing. Addison’s just said good-bye to his ex-wife, once and for all. Wren and Addison both have the whole day off. 😉

In fact, there are a number of my characters who, by the end of their stories, are about to embark on something better than where they began because they’ve figured out something important about who they are and who they want to become. I’d trade places with almost any of them if I could pick up where their story has just left off.

The winner of the giveaway, chosen by random, is Jackie over at Death by Tsundoku!

Giveaway: If you want to read about Wren and Addison and some of the other characters living in Stark Run, Vermont, leave a comment written to Jodi below to be entered into a drawing for a copy of They Could Live With Themselves. Currently, winners are restricted to United States due to the cost of shipping. A winner will be chosen at random at noon on May 5th.