*This book is part of my 2017 search to find positive representations of fat women in fiction or nonfiction, and that positive representation will not hinge on weight loss and falling in love. Thus, books will either meet or not meet my criteria, which will factor overall into my recommendations. I purposely use the word “fat” because it is not a bad word. Using plump, curvy, plus-sized, fluffy, big-boned, shapely, voluptuous, or any other term suggests that fat is bad and thus needs a euphemism.

You may remember that Susan Stinson stopped by Grab the Lapels recently for a Meet the Writer feature. Many of you asked if I would be reading Fat Girl Dances with Rocks soon. I imagine the title and the cover both draw readers in! In case you can’t see it online, the cover is beautiful and tasteful. The girl is both naked and yet covered (no nipples on her breasts or genitals). The artist, Jody Kim, used colored pencils to give the image a soft, warm, yet nuanced look by layering the colors. 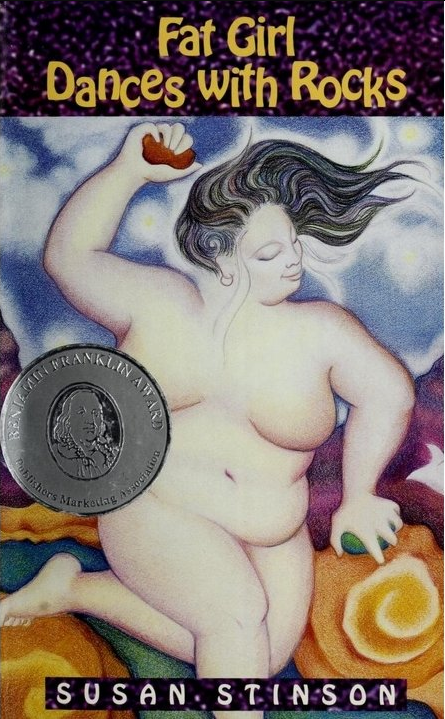 Fat Girl Dances with Rocks (Spinster Ink, 1994) is narrated in first person by Char, a 17-year-old girl who loves practicing dance moves and riding for hours in her Pinto with best friend Felice. Set in the 1970s, the book makes reference to specific disco songs from the decade. Though they’ve been friends for a good while, Felice has just now agreed to stay the night at Char’s for the first time, and what starts innocently enough with Char asking Felice to fix her hair somehow, maybe braid it, ends with a a kiss. Felice doesn’t want to talk about it.

Char claims she likes the idea of a boyfriend and being touched. She’s had boyfriends, too. Kissing Felice seems more intimate . . . perhaps not because Felice is a girl, but because they’ve been physically close through their friendship. Thus, Char’s sexuality develops naturally. I’ve watched movies and read fiction with characters who come out, and it’s always a huge surprise to the character. My friends in high school, lesbian, bi, and straight, all came to sex at different ages. While some were shy holding hands, others had physical relationships regularly. It all depends on the person’s comfort level. Char’s feelings reflect what I remember as true of teenagers forming relationships and realizing that they want physical closeness. It’s a tricky balance, and many bloggers lament the problematic “insta-love.” You won’t find that in Fat Girl Dances with Rocks.

Susan Stinson’s novel does a lot of work in the first several pages. We get the kiss, the tension between Felice and her mother, and Char’s problematic family. The father seems gruff, the brother a bit of a bully, and the mother asks Char every morning, “Did you lose weight?” Both mother and daughter are on diets, while father and brother eat seconds because they are average. Stinson sets up potential problems to be faced head on later in the novel.

After deciding she can’t live with her mom anymore, Felice leaves for the summer. One might guess she’s running away from her feelings for Char, which you may find predictable. Felice is a unique teen, though. She loves geology and identifies and collects rocks, which she mails to Char throughout the summer. Char, with nothing else to do, must get a job, so she lands at an assisted living community. Stinson showcases a variety of rabble-rousing, demanding people with different physical disabilities. A few characters are in wheelchairs, and one can’t fully use her hands.

Though I could easily tell the characters in the home apart (usually people with physical disabilities get clumped together in fiction, as if they are the same), their disabilities were slowly revealed. While I pictured Peg, the leader of a food riot in the cafeteria, one way, later on I would learn more about her the way her body was shaped and functioned differently, and I would have to rearrange her appearance in my head. But Peg helps Char grow up a bit by teaching Char how to treat people, how to think about people, just by interacting with her. Char must figure it all out.

And that’s what I loved about Stinson’s book. Nothing is handed to Char, nothing is obvious, or a given, when it comes to Char. Even her thoughts on her body are complex. Did you forget she is fat? It’s easy to, as it is not the obsession of her life. Sure, bodies are problematic at times, regardless of size, but they bring great joy, too. Since I’ve listed so many horrible things characters say about their fat bodies in previous reviews, below are some positives.

Even when Char is told to get her hair “under control,” she admits to readers, “I love my hair. It was one of my secret vanities. Sometimes at night I would spread it out on my pillow.” Hair is easy, though. Most people can have good hair. What about fat bodies? When she goes swimming with her mother for some good exercise (yes, fat people like to exercise), she watches her fat mother:

. . . once I saw her beauty, it seemed ordinary and familiar. Mom seemed to wake up in the water. She was so loose and white, buoyed up by her fat. She could rest at the surface and make little dips with her hands and feet.

Char also admires an old photo of her mother, “. . . young, on a horse, with those family breasts pushing out fringe on a fancy cowgirl shirt, and the family thighs spreading wide and strong against the shining brown saddle.” Now that, reader, is an important moment. Do you ever think of fat as an inheritance? Or are you more about the family curse of wobbly arms and big butts? Did you know that features of your body, even the fat ones, connect you undeniably to your blood kin, and that when you insult yourself, you insult them, too? I was so pleased to see Char admire her mother’s body.

Granted, Char’s mother weighs herself daily and asks Char if she’s lost weight. Something toxic is trying to be passed in those familial relationships, too. And it takes it’s toll. We all know our mothers doing a chicken dinner on their own bodies affects how we feel about ours. Are you a mother? Do you still pick at your body nonetheless? Char stands in the shower, holding her excess belly and thinking that it shouldn’t even exist. What an awful thought, but it reflects the reality of her environment.

Fortunately, Char’s not fully warped by diet culture. Home alone and missing Felice, she puts on a record and dances around naked. Pretty soon, she’s hiding the rocks Felice has mailed her in the folders of her skin (under her breasts, in her sides, under her belly). Is it really just dancing, or more of a way to get Felice closer to her body? The moment is both elegant and absurd, and that’s why I love it. She also pats her thighs as she lays in bed, thinking of them as good, faithful dogs.

Fat Girl Dances with Rocks is suitable for all ages, though it strikes me as a coming-of-age young adult novel. The characters are unique yet realistic, and avoid all the pitfalls — “insta-love,” love triangle, nerdy chic, popular kids vs. your obvious choice to side with — that usually make me avoid stories about teenagers.