I Do It with the Lights On by Whitney Way Thore

I Do It with the Lights On by Whitney Way Thore

Procured from my local library

Note: I have not watched My Big Fat Fabulous Life starring Whitney Way Thore. I heard about this book in the new FabUplus magazine.

*This book is part of my 2017 search to find positive representations of fat women in fiction or nonfiction, and that positive representation will not hinge on weight loss and falling in love. Thus, books will either meet or not meet my criteria, which will factor overall into my recommendations. I purposely use the word “fat” because it is not a bad word. Using plump, curvy, plus-sized, fluffy, big-boned, shapely, voluptuous, or any other term suggests that fat is bad and thus needs a euphemism.

Thore’s book begins with some context and then heads into her youth. At five years old, her mother is informed that Thore needs to watch what she eats. As evidence, Thore includes photos throughout the book, such as a slender girl in her bathing suit next to the caption, “Rocking my bathing suit during the summer before my first diet.” In elementary school, Thore participates in soccer, dance, and swimming. She is labeled “baby beluga.”

Her photos show a healthy-looking young girl; her analysis demonstrates someone in mental torment:

The consensus was that my body was shame. My body embarrassed me.

Below: two dancing photos, four-year-old Whitney, and prom princess — all labeled fat by schoolmates and her father. 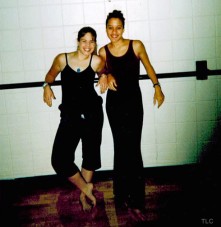 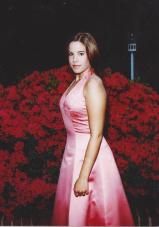 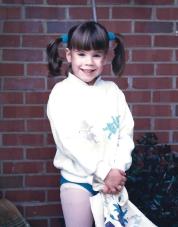 I found the photos particularly effective. Looking at my own photos I realize that when I thought I was fat, I look only slightly larger than everyone else around me. I don’t look at photos now and cringe at the change; I’m sad for the girl who hated herself so deeply, and in that way readers can create a personal connection with Thore.

Thore quickly became bulimic, and though many people know about it, no one does anything. In fact, at a special school all the girls get together and throw up. They celebrate for “a job well done.” Though detailing all the painful memories of youth can seem like a sob story in the wrong hands, Thore demonstrates how an obsession with weight can lead a young girl to a life of shame.

Readers who feel disgust at the fat body may think turning to healthy eating and exercise will fix everything. Thore works with nutritionists and trainers, she dances for hours per week. Unlike math, bodies are unpredictable. You can’t do X and always get Y, which frustrates the young woman. One person always checking in on Thore’s body is her father, whom she looks up to, but who might come off differently to readers:

One day in particular, as I was rushing out of the house for school, I told [my dad] I hadn’t lost any weight the previous day.

“Well, what did you eat yesterday?”

Though she constantly forgives her father for his abusive remarks, it was hard for me to do so, too. Perhaps she doesn’t fully see how incremental he was to her eating disorder and self-hatred, but I don’t expect writers to fully know their lives by the end of a book. She may still be learning about her dad.

Before she discovers she must love her body to love herself, Thore struggles with chronic depression, polycystic ovarian syndrome, shame, and damaging comments. Thore fails out of college after she suffers depression and gains 50lbs in four months–the result of both inactivity/poor diet and a chronic illness. After she does graduate, Thore travels to South Korea to work as an English teacher. With her more advanced class, she goes over an article about obesity in relation to health problems. To test their comprehension, she asks:

“…what is one side effect of obesity?” A quiet, attentive student who went by the name Kerrick raised his hand.

With stone-cold seriousness he answered, “Suicide.”

His answer caught me so off guard that I laughed inappropriately. “Well, no…” I began. “The article doesn’t mention that. I’m obese, right?”

Twelve blank faces looked back at me, nodding.

“Do you think I will kill myself?”

Kerrick explained, “Teacher, maybe you have some depressions and maybe you want to die.”

This part of the memoir really struck me. It never occurred to me that other people would think fat men and women want to kill themselves.

My criteria for positive representations of fat women in fiction and nonfiction are all met in I Do It With The Lights On. Boyfriends don’t always make Thore happy, so she’s willing to break up with men. She works hard at all of her jobs, putting in more hours and effort than her colleagues (disposing of the “lazy” stereotype). She also details how weight loss takes up most of a woman’s time that could be dedicated elsewhere. For instance, when she returns from Korea after several years, her parents have her move into their house and abstain from employment so she can work on fitness. She’s counting calories and exercising with a personal trainer. Yes, you can lose 100lbs, but changing the body is a full-time job.

Thore is honest, too. Half way through the book she has still not discovered the body positive movement. She’s dedicated all of her hours to food and fitness. She notes:

Once I started to lose weight and saw how difficult it was for me to do so, I lost all sympathy for fat people who said they couldn’t lose weight . . .. I prided myself on being a different kind of fat person.

Here, Thore’s attitude reminded me of the 13 Ways of Looking at a Fat Girl in which the fat characters compare one another. Instead of clinging to her attitude, Thore realizes she is delusional. Even when she is losing weight, society sees a fat women; it doesn’t matter if she’s just come from the gym. Society sees fat as a failure without any context.

Her honesty extends to her sex life. Thore seeks sexual partners for her own pleasure, but she doesn’t sleep with everyone she meets. Several pages are devoted to exploring both the flattery and objectification found in websites full of men seeking fat women to have sex with them, stand on them, or feed. Sexual relationships are presented respectfully, thank goodness. In Mona Awad’s book, you’d think fat people have sex with anyone.

One reason I wanted to find books about fat women is lack of representation. However, my quest is also to teach people of other sizes that they are privileged, not better. Fat people are asked to count calories and exercise daily so they’re better to look at. However, thin people are not questioned about their diets/physical activity, even if they eat poorly and are inactive, because they don’t look fat. Thore acknowledges she’s been on both sides of the aisle:

As a teenager, I wasn’t blind to the systematic sexualization of women . . . but I wasn’t as concerned with it because it was a system that benefited me. A young, privileged girl submits to the system by offering up her appearance as collateral, and she receives positive attention and affirmation in return for her willingness to play the game. As long as she stays obsessed with her appearance, making it a top priority, society will cheer her on for this and dole out validation accordingly.

At 130lbs in high school, Thore was praised when she dropped a few pounds. As a woman nearly 30 years old, at around 330lbs, she must prove every day she is smart, talented, cares, is valued, and deserves love.

Honest, analytical, and carefully constructed, Whitney Way Thore’s memoir is a must-read for those fighting in the #nobodyshame movement.