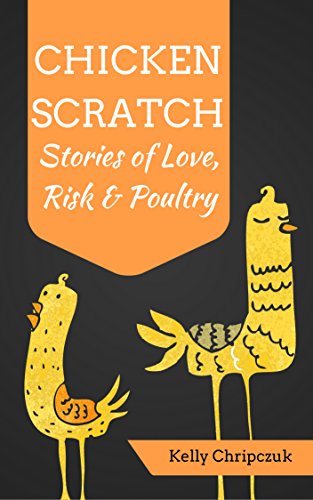 In 2014 I headed off to a writing retreat in Virginia. On the side of a mountain is where I met Kelly Chripczuk, a pastor, writer, mother, and wife who, on the first night, shared a nonfiction piece she wrote about getting four kids to a pool for swimming lessons only to realize at the last second that one of her boys needs to use the bathroom. It was her voice, calm and strong, that I remember, but also the details, such as holding her little boy toward the toilet like a weapon of sorts as he pretty much hoses down the stall.

If you check out my blogroll, Chripczuk is on there as A Field of Wild Flowers. Though I am not a follower of any religion, I’m curious about and have respect for the connection between stories from religious texts and the ways individuals integrate those stories into their lives. Chripczuk is a master of drawing in a flock of readers. I can tell I’m not alone when I feel the magic of her words and ideas. Chripczuk isn’t simply a leader; she openly shares when she falls down — hard sometimes — and exposes her wounds so that readers may not only learn from them, but care for her, too. It’s a community, really.

In October 2016, Chripczuk self-published a very short book, Chicken Scratch, and I bought it hopes of “owning” some of the magic of her blog. I wanted those peaceful words in my  hand. At 67 pages on my Kindle, the book is short. It details the decision to get chickens to make money selling eggs, but we quickly learn that chickens have much to teach a mother with four kids (which includes a set of pre-school aged twins).

Chripczuk begins by describing her love of the Psalms in the bible, which spoke to her as narratives. She writes how the Psalmists “awoke [her] to the possibility of finding God in the world around us using language to witness the reality of that presence.” While Chripczuk studies and ministers the gospel, she notes why she loves animals. She writes, “Groping for words, for understanding of my own dawning awareness, I [concluded], ‘They help me see different ways of being’.” Here is where Chripczuk shines; instead of working so hard to be the “right kind” of person, she looks to animals and mimics the way they inhabit the earth, from stretching and sniffing around the yard on the first nice spring day, to pairing off and relying on a partner. “I guess,” Chripczuk  realizes, “if you’re the kind of person who can fall in love with a Polish hen, then life’s gonna hurt.” Readers can take a lesson from Chripczuk, even if they can’t own chickens.

Chicken Scratch is honest. When Chripczuk visits a therapist, she tosses out that she got a flock of chickens, to which the therapists responds, “Hey, it sounds like fun . . . and it’s not big deal if it doesn’t work out.” But are we Americans good at failing? The debate between “winners and losers” vs. the “participation ribbon” generations never strikes me as a particularly helpful one, yet failing can always hurt. Chripczuk  announces to her therapist:

I know that . . . but it’s one thing to know it’s ok to fail and another to experience failure. I need to create chances to fail, so I can feel it all the way down, not just know it in my head.

To actually feel our feelings, well, feels like a no-brainer. But how often do you sit and feel your sadness? Your defeat? Your contentment?

When I met Chripczuk and learned she was a minister and spiritual adviser and mother, I was a bit intimidated; I am none of those things (not even close). I figured she had a the natural maternal instinct of an orangutan, an animal that I admire for its care of and love toward its infants. But when Chripczuk and her husband decide to attend a parenting class (despite already having two children) for families expecting more than one baby, she learns that two babies require a different kind of care because they need attention at the same time. The leader, “a mother of five including a set of twins,” explains how to breastfeed two babies at once, how to hold two babies at once, how to burp and bounce two babies at once. I could feel a wave of weirdness flood over me as I pictured such a life, but then Chripczuk, whom I had created as “Most Natural Mother of the Year” in my head, reports:

I can’t say for sure what I thought at the time, but I imagine I was something close to horrified at the thought of so many little people climbing, lounging, and feeding on me.

Though our lives are so very different, Chripczuk’s honesty made her relatable — and I felt closer to all kinds of women in that moment. 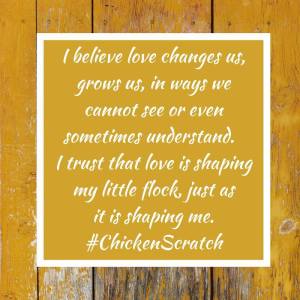 While the safety and value of her chicken flock and the happiness of her children weigh heavily on Chripczuk’s mind, she also thinks bigger picture. She knows her house is chaos, that there aren’t really chickens allowed in her Pennsylvania development, so looking around at her small farm, she wonders if her family’s lifestyle is bringing down the value of the surrounding homes and feels embarrassed by their choices. Don’t we all, for one reason or another, wonder if we’re doing it right? If we’re savvy enough, earthy enough, healthy or happy or advanced enough?

At her twin’s pre-school graduation, an event I’ll never understand, she worries that she doesn’t appear excited enough for the event. Will she take enough photos? Is the family dressed respectably enough? Will she be happy or tearful — or whatever society wants — enough? It’s the chickens though, those talkative, escapee, messy birds that remind her that animals do what’s natural, and that she can take less-than-perfect scenarios and see the beauty in them. She learns, “I’ve never found a hidden nest by shaming a bird. I’ve never sat a chicken down and had a stern talk eye-to-eye.”

While Chicken Scratch loses just a hint of the magic I find at Chripczuk’s blog, mainly because the focus is very much on chickens and misses out on the smaller moments in between, it was a pleasant reminder to look for signs from unconventional places on how to act and think, but without heading into saccharine territories.