Wow, the title sure is a mouthful, and if it gets chosen for the 2020 season at my civic theater, what would the poster look like?! A Funny Thing Happened on the Way to the Gynecologic Oncology Unit at Memorial Sloan Kettering Cancer Center of New York City by Halley Feiffer is off its leash. It’s wild. It’s raunchy. It requires four actors, two of them on their deathbed. 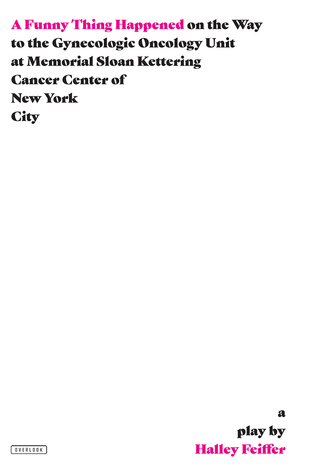 Karla, a young woman in her 20s, goes to the gynecologic oncology unit to visit her mother, who is almost always sleeping. It’s there that Karla practices her stand-up routine — she’s an aspiring comedian — that is filled with rape jokes. One joke ends:

This is a weird first 4 pages to read because A) it’s the beginning of the play, so where can it go from here? and B) this is the era of #MeToo for crying out loud! Karla and her mother are on the left side of a hospital curtain (when you’re looking at the stage), and on the right side is another woman in a hospital bed, asleep. Then enters her son, Don, a man in his 40s, disheveled, a terribly sloppy dresser but kind of handsome. He overhears Karla’s jokes and gets into an argument with her.

Keep in mind the curtain is still separating the individuals and their dying mothers, so Don doesn’t realize how young and innocent-looking Karla is compared to her dirty mouth. As the arguing dies down, Karla and Don continue to poke at each other, but we also learn that Don’s son doesn’t want to see him and that Karla’s sister committed suicide some time ago. You’re not supposed to laugh, but you can’t stop.

While the first 4 pages are very “ew” and there is a scene during which Don is supposed to go down on Karla (how are theaters doing this??), it is terribly fun to read, and I found myself giggling at odd moments. When Don tells Karla to keep it down while practicing her comedy routine, she continues her dirty jokes quietly. He repeats himself, but Karla doesn’t understand that when Don says keep it down, he doesn’t mean talk softly, but to act appropriately in the setting. Karla challenges him, noting how funny it is that someone you love can suddenly die, pointing to the absurdity of death. Like corpse-puppets, the dying mothers occasionally deliver lines with their eyes closed, which proves they are mostly playing possum so they can avoid their children and still interfere in their lives.

Definitely a rom-com, but also rough around the edges, A Funny Thing Happened on the Way to the Gynecologic Oncology Unit at Memorial Sloan Kettering Cancer Center of New York City may ostracize a number of viewers, but it would have everyone else in stitches for a good 90 minutes.