I met Debra Di Blasi about 8 years ago at the &NOW Festival in Buffalo, NY. I bought a slim book containing two novellas and read them in my hotel room that evening. The next day, the author, Di Blasi, presented at the conference. Foolishly, I told her she wrote the best novellas I had ever read (as if I was an expert in novella reading — oh, the hubris!). But she was kind, and we’ve kept in contact since. As the former creator and owner of Jaded Ibis Press, Di Blasi published my work in Dirty : Dirty, and guest judge Doug Rice chose my story to published in Jaded Ibis’s anthology of the best innovative college fiction. She’s now sold the press, but as you can tell, I am biased because I want her work to do well and she’s been kind to me, but I’ll do my best to be fair.

Ugly Town is a novel turned movie script with a dose of meta-fiction. Someone asks, “Who is telling this story?” The formatting changes throughout, keeping you on your toes. The plot is essentially a very white man named Scott somehow crosses into Ugly Town, where only the dead live. They can smell him — he stinks of the living — but luckily he falls in with Cindy, a gas station clerk, and Tina, a child with an AR-15. . . Because lurking around is the devil of Ugly Town. He’s a land developer who makes sure urban sprawl never lets up. It’s build, build, build until you can’t recognize anything.

I loved the characters of Ugly Town. The devil of the dead in urban sprawl hell actually scared me. He can smell the living Scott (who is a Very. White. Man). He can hear the dead’s thoughts and words from anywhere. Since everyone is already dead, when he’s mad, the devil tortures his minions. Another favorite is Little Tina with her green beret and automatic rifle. She makes quite an impression, though she’s still scared of the dark. And then there’s the mysterious Debbie Andrews. Who is she, and what is her role in Ugly Town? Much of the story about Scott, Cindy, and Tina is told from a large gas-guzzling white SUV. You never forget who’s dead, because they do random dead-people things:

“C-R-O-W,” spells Tina and pops the Alphabits letters into her mouth and says, “I’m eating crow!” and then she reaches through the glass of the side window and snatches a crow out of mid-air and bites its head off.

Cindy says, “Spit that out, Tina.”

Tina mumbles, “Make me!” then opens her mouth wide to show Cindy the crow’s head.

The plot starts out puzzling for a few pages then becomes interesting. It’s almost like watching a horror movie, which is what Di Blasi was going for based on the novel’s description. I was scared, both of Ugly Town and the references to waste and homogeneity that result from urban sprawl. When Cindy and (the very white man) Scott think their only salvation is to find Debbie Andrews in a library — a symbol of the antithesis of urban sprawl — the action ramped up.

Di Blasi has a long and varied career. Her projects go back and forth between narrative-driven, like Drought & Say What You Like, and highly experimental and harder to follow, like The Jiri Chronicles. I’m wondering if somewhere along the way readers complained about the challenging nature of her experimental works, because at the end of Ugly Town, Di Blasi explains what she was going for in certain aspects of her book. This isn’t just a novel about the horrors of waste and excess in urban sprawl, it’s about race. If you miss that, she lets you know. She points out how some readers don’t get her, but the astute ones followed along. I get where Di Blasi is going with her final chapter, though I felt it took away from the rest of the story. By leaning toward the didactic, the narrative becomes less impactful — but perhaps that is her intention.

Though thrown off at the end, I enjoyed Di Blasi’s refreshing imagination as it led me through the suburban hell, introduced me to the dead, and carried me face-to-face with the devil. The formatting is experimental, but in a way that adds and isn’t gimmicky. See examples below, then get yourself a copy of Ugly Town. 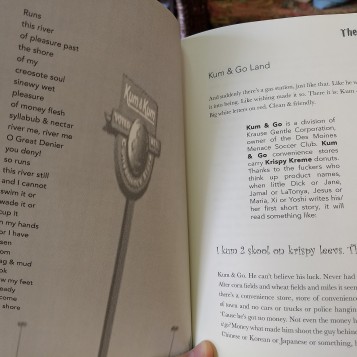 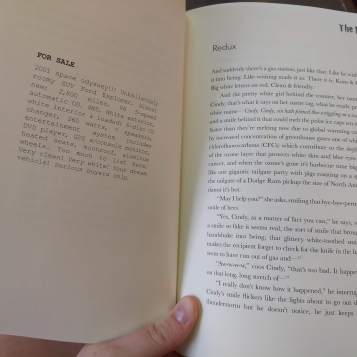 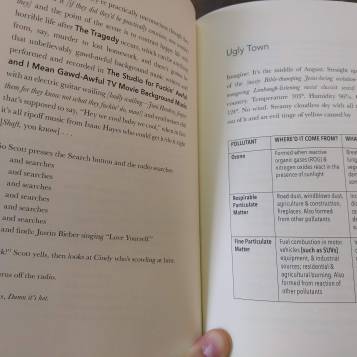