The full title of this novel by Mexican author Laura Esquivel is Like Water for Chocolate: A Novel in Monthly Installments with Recipes, Romances, and Home Remedies. I’d never heard the bit after the colon before, so when I looked it up in my library, I was confused. I thought perhaps some companion to the novel existed so readers could “cook along” with the characters. Published in 1989 and translated by Thomas & Carol Christensen, Esquivel’s novel has delighted and infuriated hundreds of thousands of readers. 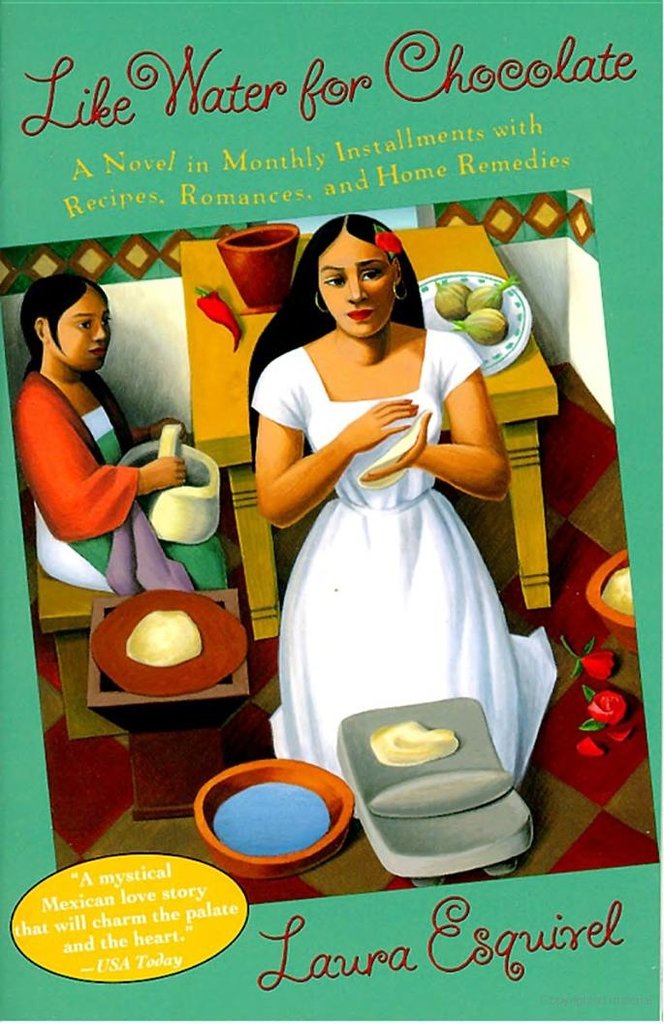 Firstly, the author uses magical realism: feelings appear in food, chickens gets sucked up in a tornado of their own making, feeling too sexual causes spontaneous combustion, etc. I argue that those who dislike this literary tool have read books in which authors were unwieldy users. Esquivel uses magical realism frequently to heighten the emotions in a common plot: forbidden love.

Tita is a Mexican teenager, the youngest of three daughters. Her Mama Elena laughs when Pedro asks for Tita’s hand in marriage because everyone knows it’s tradition in their family for the youngest daughter to remain single to care for her mother until death. Tita was never close to Mama Elena, instead seeing their cook as her mother-figure. Then, the old cook passes away. Tita is assigned to take over in the kitchen because she’s so good at it. However, sometimes her feelings spill over into her food . . .

Esquivel uses magical realism to make you feel more deeply what Tita feels. Because Pedro knows Mama Elena will never waiver, he marries Tita’s sister Rosaura so he can be close to Tita. In Water for Chocolate, new family members move in; married children do not move out. Readers learn that Rosaura has a marriage sheet (basically an embroidered silk sheet with a hole in it in just the right place) and that Pedro is rarely intimate with her. He prays, claiming he is loyal to Tita but must make a child with his wife to please God. Therefore, I was convinced that his love was true to Tita. Tita is forced to make all the food for Pedro’s and Rosaura’s wedding, and it contains such a sadness that guests start feeling upset, and then throw up uncontrollably.

There is a love triangle in the novel, but it isn’t frustrating. When Tita’s mother dies, she is courted by a doctor. The doctor is kind and cares for her when she becomes ill, so Tita considers marrying him. But there’s Pedro, always around, her first love and the man about whom she feels passionately. Do you choose kindness or passion? Does it matter that Pedro is already married?

Like Water for Chocolate is equal parts romance and humor. As time goes on,  Esquivel uses magical realism on Rosaura to show she is a hateful person. She becomes bloated, she can’t stop farting, and her breath is awful. One scene had me reading aloud to my husband and giggling:

At first Pedro didn’t find it odd that he could hear Rosaura breaking wind with her door closed. He began to notice the unpleasant noises when one lasted so long it seemed like it would never end. Pedro tried to concentrate on the book he was holding, thinking that drawn-out sound could not possibly be the product of his wife’s digestive problems. The floor was shaking, the light blinked off and on.

The lights flickering is where I lost it. The passage goes on further, conveying something unrealistic in order to make readers loathe Rosaura more for agreeing to marry her little sister’s true love. And really, I wanted to run away after this noisy passage.

Romantic, funny, Like Water for Chocolate is also sexy. But don’t worry! You never get any explicit acts or descriptions, but that doesn’t make the novel chaste. As Tita grinds spices by hand in the kitchen, Pedro wanders in and sees her. The narrator acknowledges Tita never wears a bra, and thus Pedro can see her exposed breasts. He never touches them, though; his passion comes through in his look, and “in a few moments’ time, Pedro had transformed Tita’s breasts from chaste to experienced flesh, without even touching them.” I’m not capturing the whole scene, but the build up to this moment is sexual, passionate, and never gratuitous.

Because I read Esquivel’s novel for book club, we discussed the ending. While the ending mirrored an earlier part in the book, many found it too magical. Or, maybe no one wanted to admit that the conclusion made them sad in a way. Others felt happy. It’s up for interpretation, even though what happens is not unclear. I truly loved Like Water for Chocolate and could not stop reading. It’s a fast read thanks to the clean prose, and if you cut out all the blank pages (there are several for reasons you will notice if you read the book), then it’s even shorter than it looks. Esquivel wrote a rollicking good time, equally funny, sexy, and whimsical.

*NOTE: If you live in the U.S. the film version is now on Netflix.