#AmWriting: when a tone goes academic to full-blown hillbilly, I have to ask who I am

This week’s #AmWriting was a bit scattered. I had to work Saturday morning, so I didn’t write until almost 6:00PM. Then, I got a message from one of the guys I went on the writing retreat with, and he wanted to know if I was going to do the accountabuddies thing this weekend. I had kind of given up on it because no one seemed to be responding, so I was excited to see another person wanted to write with me. So, I ended up writing on Sunday, too.

My goal Saturday was to revisit this story I started so many times. It was inspired by what I call “girls gone wild” novels. I realize that’s a terrible name because of those Girls Gone Wild movies that were advertised heavily in the middle of the night about 15 years ago. The whole point of those films is to see girls partying pull up their shirts. No, what I mean by “girls gone wild” is those feral adolescent female characters, often seeking a mother or mother figure, who have so captured my attention. Books like The Great Gilly Hopkins by Katherine Paterson, Bogeywoman by Jaimy Gordon, and Cruddy by Lynda Barry. 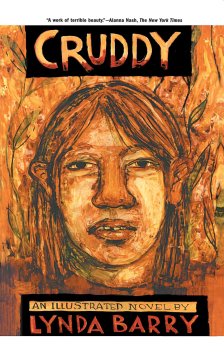 I had this crazy idea that I would write my own “girl gone wild” story and have the main character run away. She would travel across the country to find the mother who left her, and along the way stop at three aunts’ houses. Each aunt would be one of the girls in Paterson’s, Gordon’s, and Barry’s novels, but grown up. What I noticed, though, was that I couldn’t pin down a time line.

And the more I wrote, the more hillbilly my tone got. That’s right, I had a first-person heehaw narrator. A few years ago, I tried to make the story 3rd person to smooth out the tone. But what I’ve discovered is every time I walk away from a draft, the person I was when I wrote it is not the person I am today, so the tone shifts ever so slightly (or a great deal). This tells you a lot about my personality and day-to-day moods. I spent Saturday un-hillbilly-ing my story and making sure the point of view and verb tenses were consistent. Then I got to the end of the story where I was reminded that I had written a trans woman who drives a semi and loves roller derby. What was I thinking? The writing is not good. I cut most of that scene, but kept the character because I love her.

Sunday I spent re-reading the story I wrote at the writing retreat. When I say “story I wrote,” I mean “thing I started with no end.” I get big ideas and don’t know the narrative arc. As I sat there, it hit me like a ton of bricks, and I said “whoa!” out loud. My writing buddy didn’t even notice; he was too engrossed in his own creative non-fiction piece. I was so! pleased! that I came up with a shape for the story. Now, I have a goal/plan for next Saturday, and I couldn’t be happier!

In final news, one of the stories I submitted to a journal last week was accepted for publication. It’s a relatively new journal with the adorable name Meow Meow Pow Pow Lit.

Most people would ask, “Don’t you want to be published in a real journal?” For me, that question doesn’t even register. So many people are writing and submitting now that getting into a real journal means you’re already established and help the journal look good. That’s not me. Wouldn’t real journals help me get a tenure-track position? Unlikely. Again, there are so many writers out there already, the market is flooded. It used to be you needed one book to be considered for a tenure-track creative writing teaching position. Now, in many cases, it’s 2-3. I have a job at a school I love. I have a husband who makes enough money and has insurance and a sweet retirement package, which means we’re not hurting. So why not support a new magazine?

And here’s the cool part.

They do broadsides! Yes, broadsides, which are stories or poems that are designed to look appealing and be handed out on street corners or hung up around town. There’s a gonzo/graffiti feel to them. This is how Dudley Randall of the amazing Broadside Press got started. Remember him? He started a publishing revolution with broadsides. Meow Meow Pow Pow Lit also asks authors to record themselves reading the story, so when it’s published, you’ll be able to hear me, too!

See you next Saturday!