Giving Up the Ghost by Hilary Mantel

This was one of the older books on my TBR, one that had been there since I was in my MFA program. A writing professor chose it for our class, but when we ran out of time, it was nixed from the schedule. I had tried starting Hilary Mantel’s Giving Up the Ghost twice before, and I almost donated it. But I kept hearing great things about her fiction, especially Wolf Hall. Finally, I did something smart and read the synopsis of the book, which I rarely do. You can find out all sorts of things, like: this is a memoir, this is about Mantel’s mysterious body that always feels crippling pain, that she could have no children, and that she went to Catholic schools.

What confused me on previous attempts to read Giving Up the Ghost is that it starts out spooky — like she actually sees ghosts (maybe):

This set up led me to believe the memoir was about Mantel’s relationship with her stepfather. Otherwise, why was he so present immediately? I kept reading, focusing on the synopsis. 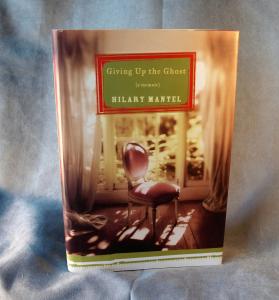 The memoir quickly whisks readers away to Mantel’s childhood. She gives us too many names (highlighting does help), though some of these people shape her worldview, such as her grandfather. Mantel’s unique upbringing makes her an interesting narrator. Here is how she remembers her grandfather:

My grandad, when he was under arms, was an instructor in the Machine Gun Corps. It was he who would teach me all my martial arts. He could still recite the manual for the Vickers Gun, tripod-mounted, belt-fed, and I learned from him, just as, when she was a child, my mother had learned it. I expect we thought it would be handy.

This was before Mantel was about three-years-old, so when she does go to school she is disappointed that everything she’s learned is not applicable to Catholic education. Because her life is interesting and she knows how to write well, I thought that was the reason for her memoir. I hadn’t reached the stuff about pain and infertility yet, though.

Mantel has a dry humor throughout that I adored. When she asks her mother if she must continue going to school, her mother tries to explain that yes, Mantel must, or the mother will be summonsed to court. Mantel asks if this is being sued. A year later, when Mantel was six, she laments, “In in the morning I am too tired to get up, but I must go to school or I will be sued.” This is a technique comedians use. Basically, set up something funny early in the act, especially using a keyword, and then mention it again much later in the same stand-up special. “Sued” stands out, showing this lesson about going to school has carried with her over the years, giving adults a good laugh.

The focus of Giving Up the Ghost is what confused me. Starting with the selling a house where she last saw her stepfather (19 pages long), she moves on to her childhood (about 120 pages long), and then the rest of the memoir is about her body being in pain (60 pages). She’s eventually told she needs a hysterectomy at 27-years-old. But as Mantel digs into her infertility and what that means for a woman raised in the 1950s, I wondered how her childhood in Catholic schools led me to her frustration infertility. I assumed it would be pain dominating the conversation; the hysterectomy did not reduce it.

I’d argue Mantel could have gotten away with two books and spent more time on her adult life, marriage, and health concerns. Though it’s not a cohesive memoir, I still enjoyed myself as I read and do recommend Giving Up the Ghost. Despite not having a clear connection between the sections of the book, Mantel is clear about how childlessness has affected her in middle age:

Then a thing occurred to me, about ghost children. They don’t age, unless you make them. They don’t age, so they don’t know it’s time to leave home. They won’t, without a struggle, be kicked out of your psyche.

Prior to her realization, Mantel and her husband were buying houses and groceries as if they did have loads of children. Thus, we circle back to the beginning: selling the house. This, we learn, is an extra house, and a family with children could use it. Mantel is moving on.