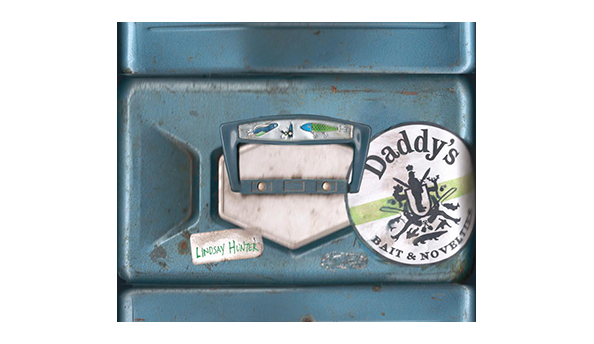 You may have heard her name: Lindsay Hunter. Hunter came out with a new novel in August 2017 called Eat Only When You’re Hungry, which had/has some good buzz around it. You may be wondering if I will read it as part of my Reading Fat Women Challenge. No. Based on the synopsis, the book implies it compares drug addiction to eating too much. Hunter’s first published book, Daddy’s, was released by featherproof books, a small funky press, in 2010. The cover looks like a tackle box for fishing, and the book must be read sideways — it’s like you’ve opened the tackle box and are looking inside. I was iffy on the pictures because in most cases, I couldn’t tell what was depicted, but I appreciated the theme of objects on a tray (I think?) and attention to artistry.

Daddy’s is 24 flash fiction stories, which are also called micro fiction. It means tiny story, though there isn’t a clear word count limit, because when have writers ever agreed on anything? I usually think of flash fiction as a solid paragraph or two. Lydia Davis is so fantastic at it that I’m teaching one of her books this spring. Lindsay Hunter’s flash fiction is more like what I would have enjoyed circa 2006 when I really got into a creative writing community. Everything is dirty, awful, unclean, and mostly uncomfortable — which I argue I loved back then because it spoke to my left over 1990s nihilism.

In Hunter’s world, characters never take pleasure in sex. The guy gets in “a few good pumps,” and it’s over. I abhor such phrasing; I’m too word-conscious to accept such smushy diction. Even if you’re saying something mean, it’s got to sound good in your mouth. Case in point: when Zora Neale Hurston is insulting a person and says they’ve got:

…a mouth looking like a dishpan full of broke-up crockery!

Is it nice? No. Pretty? No; it’s gritty, but there is attention to the sounds the words make in your mouth — and it’s fun to say as a result.

Throughout the 24 flash fictions, I never felt like I was grounded with a narrator. Almost all are “I,” but each narrator is indistinguishable. I’m debating whether there is a single narrator or multiple “I”s. Ideas are repeated in a way that suggests the author has inserted herself into these narrators to make the reader understand her way of seeing things. Narrators note food in people’s teeth, eating junky food, the smell of genitals, pulling a her underwear to the side instead of taking them off when she’s having sex, and the night sky (described differently in each flash fiction (impressive!)). Are there actually characters separate from Hunter? I’m not so sure.

It’s a problem I see coming from a lot of creative writing programs, though I don’t know Hunter’s own background. I do know the homogenization of writing thanks to creative writing programs (of which I am a product) is an issue that concerns the writing community. In 2009, Cris Mazza published an article about this issue called “Too Much of Moi?” in The Writer’s Chronicle (again, Daddy’s was published in 2010). Small press publishers saw a rise in books written in first-person. People Mazza interviewed pointed out that the boundaries of character and authors is nearly absent. I argue that we got so much pressure to always be writing in fiction programs that it became easier to hide ourselves in our stories in order to meet deadlines. Besides, it feels like all the plots are used up, so why not write about ourselves? (so the thinking went). I was in many fiction workshops in which a writer justified his/her choices in a story because it “really happened.” Mazza spoke to Sally van Haitsma, a literary agent, who noted the following:

There does seem to be a correlation between [first person’s] overuse (or misuse) and its popularity with writers who are still learning the ropes of their craft. Almost all the fiction I’ve represented to date has been written in third person. I have to admit, when I begin reading a manuscript in first person it does raise a “red flag.”

But I don’t mean to support my point simply to belittle Lindsay Hunter. Heck, I’ve written the same kind of fiction I’m talking about. I much more enjoyed Hunter’s short story collection Don’t Kiss Me, published in 2013. She grew as a writer. There was a particular piece of sentence in Daddy’s that hinted at Hunter’s future growth. The narrator is floating on her back in a swimming hole in the middle of the night:

…it was the queerest feeling, what with my front nearly bursting at all that glitter and joy and my back tense and frightened of what swam underneath.

While I love that juxtaposition, but you may be asking what she’s looking at that brings her joy. It’s a distracting duo of metaphors: “The stars that dotted the sky were as white as little baby teeth and twinkled like diamonds. . . .” (emphasis added). While it’s not a mixed metaphor, I’ll bet you’re picturing twinkling baby teeth, too. I wouldn’t recommend you start with Daddy’s, but you should give her later publications a chance.