#ReadingValancy discussion post for those who have read The Blue Castle

Thanks again to Naomi at Consumed By Ink for hosting the #ReadingValancy read-along this November! When I have questions about Lucy Maud Montgomery, I turn to Naomi. She’s sucked me into an obsession. I’m also glad I got to know a bit about more Sarah Emsley, Rohan Maitzen, and Jaclyn, who also joined the read-along.

The Blue Castle was something different from what I’m used to. Our heroine was an anxious person with validation issues, and our hero was a slobby runaway dreamer with a P.O.S. car. Or was he? I felt it was very odd that Montgomery chose to hide that Barney Snaith was Valancy’s favorite author, John Foster. What is the purpose of this? I wondered if Montgomery was trying to say something about the state of publishing. Although John Foster is beloved in Valancy’s town, how popular is he elsewhere? Perhaps it was shameful to be a writer at this time; Barney certain scoffs when Valancy mentions or quotes John Foster’s work. If he knows his wife loves Foster’s books and was practically saved by them when she lived with her mother, why not admit that he is the voice behind the pen?

It’s possible Montgomery is suggesting an author couldn’t make enough money to get by, but she certainly did — though you have to consider the huge amount she produced and published to support her family. I knew John Foster was really Barney Snaith — who else but a dreamer lives on an island all alone? And what better place for a writer to write? I was happy with this and crushed by his wealth, which his father obtained by swindling people into purchasing his useless potions.

To learn Barney is also the son of Mr. Redfern left me wondering why the story had to go over-the-top. I should have seen something coming when Barney kept asking Valancy if she would be more happy if he were wealthy, but my mind was already made up that he was a writer of modest income. Didn’t it seem like he was asking her if she regretting marrying someone who is basically permanently camping?

In the end, Barney and Valancy travel the world, and I wondered if that fit with either of their characters. Yes, Barney had traveled a lot before, but it was implied that he was a lost, brokenhearted wanderer, not an world seeker. Perhaps it’s my own bookish bias that made me romanticize Valancy and Barney, their funny pets, and a couple of kids playing in the Blue Castle year round with stories, writing, and wilderness being an integral part of their lives.

I also thought something much more menacing would happen in the end when Uncle Benjamin attempted to play the voice of reason when Valancy returned home after she felt ashamed for accidentally tricking Barney into marrying her. Of course Uncle Benjamin wanted in on some of that sweet, sweet Redfern money! Then I wondered: how would he get any of it? I thought for sure he would have a trick up his sleeve. After he changed his will to Valancy, I was surprised: she didn’t need money (duh). I had to remind myself that by changing his will, Uncle Benjamin is basically saying, “See! I’m a good guy! NOW, GIVE ME SOME OF YOUR MONEY!!!” There could have been some real drama in the end, is what I’m trying to say. Did Montgomery miss an opportunity, or did she know when enough was enough?

One part I neglected to mention in my review of The Blue Castle is the mention of Grundy: “No Mrs. Grundy.” I wondered if I had missed something. Fortunately, because my e-book is a combo of The Blue Castle and The Tangled Web all in one file, a search for “Grundy” led me to learn that the Grundys are characters in The Tangled Web. I do feel very frustrated that L.M. Montgomery couldn’t keep her books straight. The same thing happened in the Green Gables series. Because there were books of short stories in between the novels set in the same place, characters of whom I had never heard would pop up in Anne Shirley’s life without introduction — because they had already been introduced in a different book. If that’s the case, why do publishers not sell the Green Gables series in its totality!? So frustrating.

Overall, I did love The Blue Castle and delighted in the horror Cousin Sickles felt keeping the secret of Valancy sliding down the banister to herself and the *squee* in my heart when Barney shaved. Oh my, he shaved. (Though he still didn’t love her yet? What was that about?!). 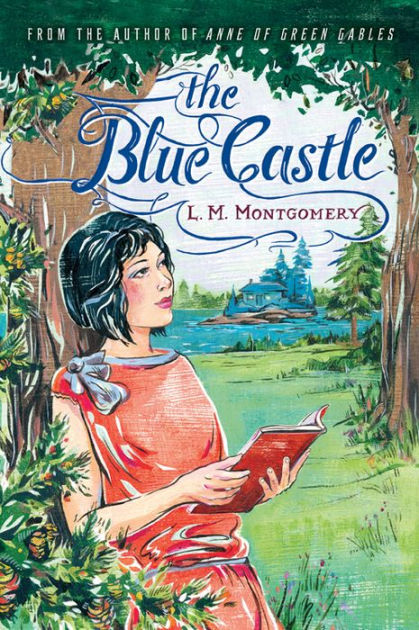