We Have Always Lived in the Castle

Content Warning: imagining people’s deaths, discussion of a murder, and a creepy ambiance that you may find uncomfortable/spooky (if you don’t like “horror” novels).

Shirley Jackson’s most famous novel, We have Always Lived in the Castle, was published in 1962. My copy is from the library, published in 1963, and the copyright states that the book was in its 6th printing. Jackon’s bio in my old book is in present tense. *sad wiggly chin here* Jackson died at 48, and I mourn what else she could have written. Actually there are STILL books coming out by Jackson, compiled by her children from Jackson’s boxes of papers, such as Let Me Tell You, released in 2015. 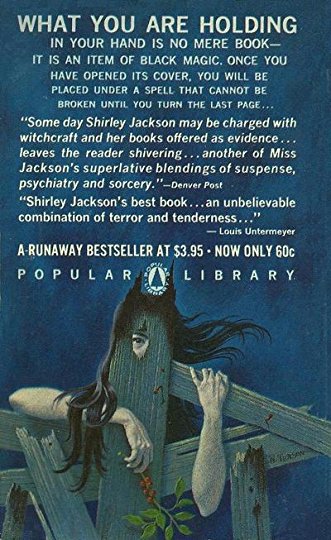 I’m familiar with Shirley Jackson’s wonderfully horrifying works, having read The Haunting of Hill House, “The Lottery,” Hangsaman, Let Me Tell You, and The Road Through the Wall. In her most famous work, Jackson opens We Have Always Lived in the Castle with Mary Katherine Blackwood, a nervous and hateful girl who enters her local village to buy groceries. She imagines smashing in heads and walking on the corpses of anyone who looks at her. Quick to return home, Mary Katherine imagines she is on the moon, where things are better. Waiting at the house are older sister Constance and invalid Uncle Julian.

Some (unclear amount of) time ago, Constance was tried for the murder of every other Blackwood after they died by poisoning after dinner. These three misfits are all who are left. Fearful, Constance hasn’t left the house since the trial, and the deaths of all other Blackwoods drove Uncle Julian to illness — physical and mental. Every day is the same and runs on schedule until a strange cousin arrives and upsets the household by endearing Constance to him. Is he there to connect to family? Find the source of their money and take it? Be helpful?

We Have Always Lived in the Castle is narrated in first-person by Mary Katherine, but she is able to keep everyone, readers included, at a distance. We feel we would be wished dead if we crossed paths with her. Her dream to live on the moon separates her too, but also suggests MK would be happy to suffocate to death. She is also a superstitious girl, burying items around the expansive property to prevent bad things and coming up with magic words that, if not said, will create a desired outcome. Mary Katherine’s superstitions are so omnipresent that it’s easy to believe in their power. Does Shirley Jackson suggest MK is a witch of sorts? Perhaps. Constance is the opposite: blond, pale, blue-eyed, like a fairy princess, and good. In MK’s head, we know she is not good, though it’s often hard to pinpoint why. This juxtaposition left me on edge, wondering how Constance could be a murderer and MK not.

Jackson’s true talent lies in her ability to creep readers out over practically nothing. A tone. Odd diction. Unusual reactions. While Uncle Julian describes the damning evidence against Constance that made her the only suspect in the murders, she’s smiling joyfully. Constance buys arsenic (“to kill rats”), she makes dinner, sets the table for dinner, and watches “them dying around her like flies…and never called a doctor until it was too late.” After, Constance washes the sugar bowl in which the arsenic was contained (“I saw a spider in it”) and “she told the police those people deserved to die.” Here, Uncle Julian defends Constance’s phrasing: “I deserve to die — we all do, do we not?” Rational me is thinking, How can you not all see how obvious this is! She’s an angelic murderer!! But Jackson doesn’t make it so easy. Constance is sweet. Constance is motiveless. Constance is not imprisoned. It is the villagers, instead, who are the faceless evil, who practically move in slow motion and without civilized behavior (much like the end of “The Lottery”). 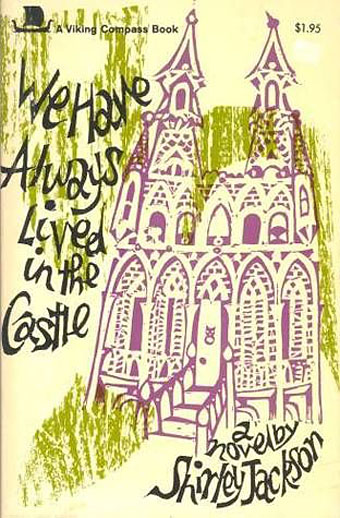 Per usual, Jackson plays with time so that we’re never quite aware of how much has passed. The narrative leaves unclear how long ago all but Constance, Mary Katherine, and Uncle Julian were poisoned to death. Although told that Constance is 28, I don’t know how old MK is. She’s described as a silly girl, but is likely 18 or older. (10/29/2017 Correction: My husband pointed out that on page 1 Mary Katherine says she’s 18.)

Later, after the Blackwood house is irrevocably molested, Constance and MK continue to live there, but no longer go further than the immediate lawn. The house is taken over by the wilderness. Exactly how long have the sisters remained in the uninhabitable house? Slippery time indeed. It passes. The sisters become the stuff of legends and are able to survive on food left on their porch. Time seems infinite. Many villagers say they once heard of the sisters, but don’t remember them. Are the sisters old ladies now? They leave food offerings to appease the sisters when someone whispers a potential offense against the Blackwoods. We’re back to superstitions; Constance and Mary Katherine can’t hear people talking about them in the village, of course. Jackson slips into the realm of fairy tales and delights the reader with tropes used in strange ways. I would argue We Have Always Lived in the Castle is about where a fairy tales comes from and found the novel it to be another chilling accomplishment listed on Jackson’s resume.