Today I want to welcome Joan Wilking to the Meet the Writer series. Wilking is a writer of short stories and nonfiction, an artist, businesswoman, and an ad designer. Her new book, Mycology ($14.95), was released from Curbside Press in August 2017.

Grab the Lapels: What would you like readers to know about your new book, Mycology, which won the Second Annual Wild Onion Novella Contest, judged by Lindsay Hunter?

Joan Wilking: It was a long time coming. Mycology went through a number of iterations that resulted in much darker endings. The characters in earlier versions were more like cartoon characters than actual people. I started the book as a graphic novel combining illustrations and photography, but when that became too cumbersome I put it away for a while. When I came back to the book my attitude had changed. I saw something in the characters that made me know them, not as cartoons, but as loners who were missing something by not having meaningful connections in their lives. I wanted to help them find them.

GTL: Did you learn anything from writing your book?

JW: I learned a lot about mushrooms: their lifecycle, their toxicity, their habitats. After attending some mushroom identification workshops, I learned that I’ll never eat a wild mushroom that hasn’t been identified by someone who really knows mushrooms or that has been chemically tested. There are too many species that look like one thing but are actually another that can make you sick.

GTL: Why do you think your book would be a good choice for a book club pick?

JW: The characters come from very different walks of life. The paths they follow before they come together have elements of interest that are both humane and controversial. The book spans a period in American history from the mid-1950s to the late-1980s, from Father Knows Best to Sex, Drugs and Rock ‘n Roll, culminating in the devastation at the height of the AIDS epidemic. I think readers will find things to identify with (and be repelled by) in the characters that make for a good discussion. 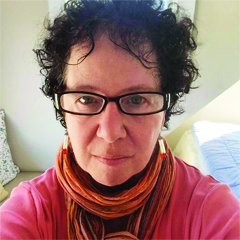 GTL: Are there aspects of your writing that readers might find challenging to them?

JW: The book doesn’t follow the pattern of a typical novel. The opening of each of the fifteen sections is part of an anthropomorphic study of the life and death of a poisonous mushroom and of the wind, as it moves in an around the lives of the characters. There are also some social issues readers might find challenging, or disturbing, about the way pedophilia and homosexuality are presented.

GTL: Does your writing include any research?

JW: For a little book with very short chapters it required a lot of research into mycology, of course, and into the social history of the decades covered in the book. I didn’t want to have to date the sections, so I researched music, current events, fashions, home décor, etc. of the 1950s, 60s, 70s and 80s and wove references to them throughout the book. I also did a lot of research into the settings I used since the book’s scenes occur in upstate New York, Manhattan, several places in California, Belgium, France, and the Massachusetts north shore. I wrote about a key aspect of what I learned from my mycology research in an essay for Necessary Fiction.

JW: An artist. I was a painting major in college. I fell in love with graphic design after I graduated. I spent the next forty years designing ads and marketing programs for the likes of Betsey Johnson, culminating in branding high-end real estate for big developers nationwide as the creative director of my own firm and then of a Boston area ad agency. I didn’t start to write until the late 1990s.

Everything I write starts with a visual reference, tangibles that eventually connect to intangible characterizations. There is a passage in Mycology where a character reminisces about Sunday dinner in a restaurant in San Juan, decorated with Plexiglas boxes containing hundreds of taxidermied butterflies.

I ate in that restaurant and knew it would appear in something I wrote when the time was right. The author, Pam Houston, calls the tangibles “glimmers,” daily images and occurrences that catch your eye and stick in your head until you’re ready to write them out. The act of writing is not that much different for me than painting. I collect the images and reinterpret them using words instead of paint.

Thank you so much to Joan Wilking for visiting Grab the Lapels!