Damnation, Janice Lee’s third book, was an intimidating piece to take on; conceptual works often can be, as it’s never a given that I will understand that concept or theory or the context in which the book was written. If you’ve read other reviews of Damnation, you’ll learn that it is “a book-length meditation on the long takes of the Hungarian film director Béla Tarr” (3AM Magazine). “What and who?” I ask. Apparently, Hungarians aren’t big in central Michigan. This is when more intimidation mounts. Will I be “smart enough” to read Janice Lee? After I read the introduction by Jon Wagner, a Professor of Critical Studies at California Institute of of the Arts and a Visiting Professor in the School of Cinematic Arts at the University of Southern California (just copying from his bio at the end of Damnation), I knew the answer: Nope. 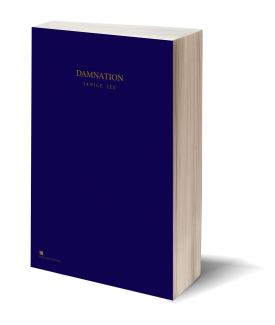 Part of being a reviewer, though is having the confidence to remember that I’ve read a lot of books in nearly every genre and style (blank books, digital art/music/words books, books that were what the author copied from a newspaper–lots of “out there” stuff). I took on Damnation with my game face on.

One thing that really helped, I must admit, was that the author had pointed me to a link that would take me to a place where she explains in her own words what this project is about. Here, Lee is honest about why she started this project, where she was emotionally, and to what level she took her obsession. It is a fantastic little piece, and I personally wish it was the introduction to the book instead of Professor Wagner’s, who is clearly an intelligent and thoughtful individual, but one who assumes we all have a film criticism in our brain files.

Once I got past the introduction, the work itself was just gorgeous. I was really surprised by how many quotes I wrote down to keep for later. While the “plot” (if one is to call it that) is very simple, the presentation is magical. Basically, a small town gets a package that is addressed to no one in particular. When they open it, they find inside a Bible, which is quickly passed from person to person. We learn “In a place where people both fear and revere the Word, it is also believed that certain words can manifest themselves in this plane and cause real pain and illness upon its bearers….children [start] hallucinating, having strange dreams of great destruction, and haphazardly reciting Bible passages in both their sleep and waking lives.” Since everyone is afraid to hear the Word, they make more noise to drown out the children saying the Bible passages. The town is one big, noisy hot mess. Also, it won’t stop raining. And then there’s wind, and it won’t stop being windy. The characters live in fear of being influenced by the Word: “It’s that book! You’ve been tainted with that book. I told you we shouldn’t have opened it. You insisted. God, your impenetrable stubbornness. And now look at what you’ve brought upon yourself. Endless grief and insomnia and foolish words. We should leave it alone, I said. If we don’t invite the devil in, he has a harder time getting in, isn’t that right? And now he’s here. You’ve brought him here. We all have. Perhaps, then, we all are doomed.”

This book is written in flash fiction. Some sections are just a few short sentences, while others go on for 1.5 to 2 pages. The result is there are a lot of blank pages to make sure each new flash piece begins on the right side of the page, so really the book is a quicker read than you might imagine. Sections examine what someone or something is doing during different moments. For instance, we see into the post office, but not from the perspective of the postal employee. Read about “the lovers” as they discuss staying or parting. Watch the cows or dogs move through the town. This might be what is meant by “long shot,” though I’m not sure what makes this style of writing different from other fiction written in flash. Adding the film aspect could lift the writing to greater levels for those who have the background, but it does not hinder those without. Either way, Lee’s writing is beautiful and thought-provoking. Here are some of my favorite passages (two quotes per theme):

On the past: “Everything that ever went wrong will be just a luminous dream from the past. I can unstitch this fabric and then stitch it back up.”

“What will we cling to when our world explodes? Many would answer those they hold dearest: their love, their children. That what makes them happy. But in reality, they will hold on to their pain. They will cling to their regrets and failures until the sweat and puss are squeezed from their pores.”

On depression: “The windowsill is rotting in places, but neglect and age helps one to forget these kinds of things and allows one to stay in bed longer than usual, especially when even the thought of getting dressed is exhausting.”

“The sadness, mixed with the rain, perhaps rusted around her exterior, like a hard metal coffin that held her not-quite dead body but also served as her defensive wall from misery and suffering of the world.”

On death: “Why were we only made to die?”

“-Probably I’m just anxious about aging but I can’t sympathize [with the death of the girl]. What does it matter if we’re all doomed anyway?

-Are you bringing up the book again?

-Why not? Look at what it’s done to the town. If the end doesn’t come soon, we’ll surely take on the job and finish each other off.”

The characters you’ll meet in Damnation are haunted individuals with no real set course in life. They can’t decide to stay or leave the town. They aren’t sure if hope is deadly. Things are deteriorating, though, and the people can tell: “From the depths of the earth, he thinks he can hear the dead stirring, then screaming, such horrible screaming that originates from below the ground.” If you are brave enough to get past what you’ve heard about Damnation and read the introduction knowing that you probably don’t have a background in film theory, you will easily find a seat waiting for you in Lee’s sad, ghostly world.

I want to thank Janice Lee for sending me a reviewer’s copy of her book in exchange for an honest review.