I eagerly jumped into my second Monica Nolan book! Lois Lenz, Lesbian Secretary was a delight to read, though sometimes it felt just a tad silly. Bobby Blanchard, Lesbian Gym Teacher felt more grown up, in a way, because she knows she’s a lesbian. Lois Lenz took 80% of the novel to figure it out (despite making out with women through the whole thing). Thus, I enjoyed Bobby Blanchard’s story a great deal more. Mind you, you don’t have to read Lois Lenz first. However, I would recommend that you read the books in order (there are 4 lesbian career girl novels) for maximum enjoyment. 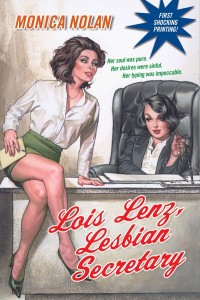 It’s 1964 and we learn that Bobby Blanchard is a field hockey player. She played in high school and college, but then a stupid accident causes her to break a bone, leaving her unable to go pro. Now what does she do? Going pro was her whole plan, despite majoring in teaching in college. Miss Watkins, a guidance counselor (who was the guidance counselor in Lois Lenz, Lesbian Secretary) visits Bobby in the hospital and reminds the sad athlete of her teaching credentials — and says there is an opening for a gym teacher at Metamora Academy for girls! (By the way: Bobby and Lois did not go to the same high school, so Miss Watkins is a bit like a guardian angel guidance counselor for lesbians, which I find funny).

Bobby has concerns about being a teacher, though:

“But my grades — my brains –” Bobby struggled to express herself. “A teacher has to be smart.” How she’d sweated over those lesson plan assignments in Pedagogy II, how lost she’d felt when the class discussed the pros and cons of module-based teaching!

But off to Metamora she goes. I’m not sure if all academies have the same labels, but instead of “gym teacher,” Bobby is the “Games Mistress.” Instead of grade levels, like 9th or freshman, the girls are “formers,” as in “4th formers.” I could never keep track of what each form meant, which made it hard to image the students’ ages. The alternative titles were something I did not enjoy.

Miss Watkins, the guidance counselor, almost never gets it wrong when she advises young lesbians! But not all the Metamora faculty are that excited by newbie Bobby, especially the new Math Mistress, Enid:

“And when you teach something as basic as gym, you can always tell them to do laps when you run out of material. . . .That’s what my high school gym teacher used to do.”

How insulting to Bobby! Author Monica Nolan seems to enjoy writing the prim, snippy, librarian-type. In Lois Lenz, Lesbian Secretary it was Netta Bean. In Bobby’s world, it’s Enid. When there is always a know-it-all with a secret and a grudge in Nolan’s novels, readers can predict that the librarian may let her hair down and whip off her glasses for some between-the-sheets fun. Sometimes, the stereotype helps with expectations, and Nolan uses the sexy librarian stereotype beautifully. 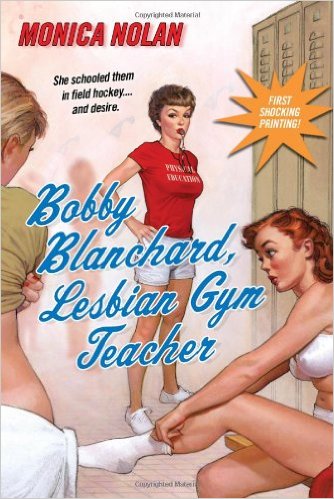 Another distinct aspect of the world Nolan created is that everyone is lesbian, gay, or bisexual. You can guarantee that married or not, man or woman, teenager or adult, everyone is (note that very few men appear in Nolan’s novels). Nolan doesn’t make her character’s sexuality much of a secret, either, which is interesting. You just keep reading and become part of a world in which no one is straight, and it all is perfectly normal. You don’t have to wonder who’s point of view is the focus; it’s the titular character, and she’s a lesbian who doesn’t feel shame. I still remember Lois Lenz declaring, “I’m a lesbian career girl, too!” and feeling very excited about such a world.

Nolan does add a lot of subplots and points of contention to keep the story going like a mystery novel. When the mystery was solved at the end of Lois Lenz, Lesbian Secretary, I thought it was a bit silly. Some subplots circling Bobby’s life are:

There’s a lot to take in! I’m not sure why Nolan heaps it on, but she did in both Lois Lenz and Bobby Blanchard. Piling on subplots was something I noticed in the mystery novel Terror in Taffeta. I want to call the Lesbian Career Girls series “cozy mysteries.” There is sex, but it’s mostly off page. There is almost zero violence. Things are wrapped up happily in the end. Perhaps plenty of subplots to misdirect readers is a key ingredient of a cozy mystery, one that other readers will appreciate more than I did. On a positive note, the books aren’t about the mystery, though; it’s about watching the main character develop into a stronger woman (YES!).

Most notably, Bobby Blanchard is just plain fun and funny. She’s always using sports metaphors to explain her feelings about other women. Early in the book Bobby meets up with her girlfriend, Elaine, a young woman who refuses to be seen in public with Bobby. Elaine wants to marry a boy so her father, who has lots of money, will stop threatening to send Elaine to college if she won’t get hitched (Elaine loves being lazy and having money). In reality, Elaine says, she will keep sneaking off to have sex with Bobby and marry some guy with even more money! The gym teacher let’s her have it:

“You may not be off the team, but your team loyalty is certainly in question!” Bobby responded hotly.

Elaine’s temper, never placid, began to fray. “Maybe I need a more competent coach,” she shot back. “One who understands the point of the game!”

“What are you saying?” demanded Bobby indignantly. “Are you implying my ball-handing skills are slipping? Why, I taught you everything you know! Your technique, your wide knowledge of plays…”

Keep in mind, they’re talking about whether or not Elaine is a traitor to lesbians, and if Bobby is sexually experienced enough. The metaphor goes on for just long enough to have any reader in stitches!

Furthermore, Nolan includes other bi-sexual women in the book who want Bobby in bed but not public, giving the reader serious food for thought. There is no shame in the characters regarding their sexuality, but the 1964 setting means society may have something to say about two women (and at one point there is a raid on a lesbian bar). Society is never one character; it’s a presence, though, allowing Nolan to overlap her imagined world and reality. In a way, Nolan asks the reader to consider her attitude toward LGBT couples — and not just feeling liberal, but actually seeing LGBT couples in public and not making untoward comments.

Monica Nolan does some fun world building when Miss Watkins, the guidance counselor from the beginning of the book, runs into Bobby while she is with Netta Bean, one of the main characters of Lois Lenz! Netta is a teacher, too, so she tries to help Bobby feel better about yelling unreasonably at her students by sharing some mistakes she’s made, including when she “failed to take a student’s threat to the assassinate the principal seriously.” The author keeps the characters just over-the-top to move you to gently snort with laughter. And the cross-over of the author’s novels is such a delight to read! I feel like I’ve run into an old friend, since I learned so much about Netta before.

Bobby Blanchard is an enjoyable read, one that I was happier to pick up and read to my husband each night than Lois Lenz, Lesbian Secretary. Beware: Bobby’s story is definitely more risque: she knows she’s a lesbian, she is promiscuous, and at one point has a sexual relationship with an 18-year-old student (legal, but questionable ethically). Overall, though, a great, fun book!