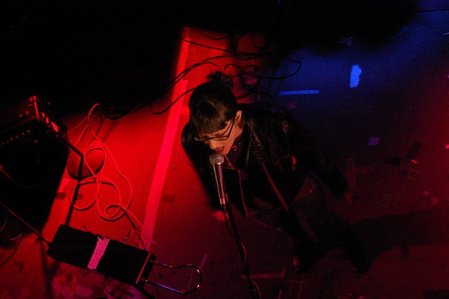 I want to thank Snežana for answering my questions! You can read more about her new book, Broken Records. Snežana is a contributor to the Wreckage of Reason II anthology, containing experimental works by 29 women, including yours truly, so be sure to give the collection some love!

Do you recall how your interest in writing originated?

I spent a lot of my early childhood reading picture books and children’s poetry books, and have a very pleasant olfactory memory of the local library. I also remember making my mom write down our favorite children’s nonsense poem on a blank page in the book of poems by Oton Župančič (or maybe France Bevk? Unreliable memory!), which was my first editorial effort. Around at the same time, I wrote my first small rhyming poems. As most people who end up becoming writers, I got caught in the cycle of reading and writing, which becomes a compulsion.

Do you have a specific writing style?

I think I do. It’s nothing I set out to do on purpose, but the fact is that most of my syntax is paratactic, and both my imagery and commentary are sparse. I list a lot, one way or another, and I probably use metonymy more than metaphor. I mix irony and self-deprecation into almost everything. I tend to write fragmentary texts that end up cohering into books. I’ve been told that both my poetry and prose sound the way my speaking voice sounds, which means that, when I write in English, I write with a foreign accent. My native language is Serbo-Croatian, and in both of those languages I tend to be more or less subtly proletarian and feminist. All of the above is very off-putting to some readers.

Is there anything you find particularly challenging in your writing?

The challenge is to find the sweet spot between discipline and spontaneity in your writing habits. Finding time in the first place is an issue. Infant projects that I haven’t completed multiply over the years and nag me. Should I work on them every day a little bit? Become an insomniac? Quit working day jobs so I can finish everything? I can’t, because I need money to get by. On the other hand, I’m convinced that nobody needs to write more than 30-ish books over an entire long life span. In fact, a lot fewer books than that is better. Ten or fewer during one’s whole life. Okay, two or three is optimal. Delete all the tedious stuff.

How do you think you’ve evolved creatively?

I’m the type of writer who keeps trying new forms and genres, especially those that mesh with my style. I’m not sure if that’s evolution or just another aspect of my life-long compulsion. The area where I do feel I’ve evolved in every sense of the word is as a purely self-taught songwriter and singer/musician. As opposed to writing poems and prose since early childhood, I only picked up a musical instrument as an adult, well into my twenties. I taught myself some chords and began writing songs. I’m not sure why I did that, since I was actually quite scared of performing those songs live or recording them. I had trouble keeping the guitar I had in tune, partly because of my imperfect ear, partly because the guitar was full of holes; it was literally a wounded war survivor. My second guitar was the cheapest I could find in the town of Wilmington, NC, and it had super high action, just like the old guitar. I thought that’s just how guitars were—only much later did I learn that some guitars are quite comfortable to play. With my first two guitars, I had to press those strings like a maniac to get a semi-decent sound out, or so I thought. This all began to change when I moved to Chicago and a friend loaned me his electric guitar and a small amp and I could start, ever so slowly, unpeeling one bad habit after another and gaining better muscle memory when it came to both chording and strumming. Now I play with a lot less tension in my hands, arms, and the rest of my body, and so it all feels much more free and fun. I’ll never be a guitar hero, nor do I want to be, but I write pretty decent songs and am no longer scared to play live or to record.

Is there a specific “achievement” a person must “unlock” before she can call herself a writer?

Not really. If you’re literate and you like to write, you’re a writer. As a human being, you need to communicate, and writing is one of the best tools for that. Most of us are bad writers in the sense that we constantly record the banal—nowadays in the social media, before that in e-mails, and before that through snail mail. Between that and the vaulted position of the brilliant pro who supports herself by writing and selling her books (plus maybe teaching creative writing) is the vast spectrum that most of us who identify as writers occupy.

Do you feel it’s important that the meaning of your work be accessible to the reader? Why or why not?

First of all, I have very few readers, I’m totally aware of that. As far as the accessibility of meaning, it’s important to an extent. I do aim to communicate certain points about how I see the world and how absurd it is.  But on the other hand, I aim to simply bring some pleasure to a reader with my style of writing. I realize that this sounds like the old “teach and delight” creed, but of course those very conservative dead white men were correct to an extent. The question is, teach what and delight how? I guess I aim to teach about subversion and about imagination and I am to delight the readers by surprising them, not by lulling them into complacency. From what I know, my writing preaches to the choir (a very small one at that). Reading publics are splintered and I will probably never be read by those who might fundamentally disagree with me, who might hear something from me they haven’t thought before.