In my last blog post, I reviewed Zarina Zabrisky’s newest collection, Explosion. I praised the level of engagement with politics and educating readers while being beautifully crafted. I’ve been reading Zabrisky for the last several years, and I am truly entranced by her work, both in fiction and as an activist, poet, and performer. Zabrisky was kind enough to answer my questions about Explosion.

About the Author: Zarina Zabrisky is the author of three short story collections (Iron, 2012; A Cute Tombstone, 2013; and Explosion, 2015), a book of collaborative poetry co-written with Simon Rogghe (Green Lions, 2014, and the novel We, Monsters (2014).

Zabrisky started to write at six. She earned her MFA from St. Petersburg University, Russia, and wrote traveling around the world as a street artist, translator, and a kickboxing instructor. Zabrisky started to publish her work in 2011. Since then her work appeared in over thirty literary magazines and anthologies in the US, UK, Canada, Ireland, Hong Kong and Nepal. Zabrisky received multiple nominations and awards, including three Pushcart Prize nominations and 2013 Acker Award for Achievement in The Avant Garde. She is a co-founder of The Arts Resistance, a collective resisting the war and injustice through the means of the arts.

Grab the Lapels: Your writing is so political and passionate. What does writing mean to you?

Zarina Zabrisky: My stories tell the inner life of people. Collective life events shape our life paths. I ran from my home country, changed my language, my mind. You stayed in your home country. We both made choices due to politics — staying would kill me. So, personal is formed by public, “political.”

A teenage girl coming of age is what interests me in my short story “Explosion” — it just coincides with Chernobyl explosion. It is still Kuzya’s life, Kuzya’s growing up and struggle — but can we separate the life of her country and the world at large from the growing pimple on her chin?

I was booked to fly on one of the 9/11 flights, with my two kids; one was a baby then. The national tragedy feels very personal, real; it is inextricable for me from breastfeeding and diaper changing at an airport, for hours and hours, watching the explosions on TV-screens.

Everyone has their own version of war, earthquake, terrorist attack, coup. “Politics” is an empty shell if not filled with the grit of real lives.

Passionate? Can real writing be anything else? Why write if it is not your passion? My writing is my life. I wrote about it in an essay called “The Liquid Sky of History: Politics, Punks, and Art?”

GTL: Since your stories are so passionate, can readers assume some of them are semi-autobiographical?

ZZ: This is a good question because the concept is wrong, in my opinion.

Can I only get passionate if it happened to me? I just wrote and performed a story about a brief tragic love story in a concentration camp. I never was in prison. Few weeks ago I met and interviewed an artist who grew up in a labor camp, so I was reading and watching a lot of interviews and memoirs of survivors — and the story came.

I was not in Chernobyl at the time of the explosion… I never was a man, never killed… Yet, I wrote all this. Literature and art give the power to live many lives, not one defined and confined by the boundaries of one body.

I would rather use the word “compassion,” not “passion.” Kundera in “The Unbearable Lighting of Being” has a stunning piece on compassion and what it means to co-feel with others… I really recommend it.  Without compassion there is no literature.

GTL: Do you have an audience in mind when you write stories set in Russia?

ZZ: There is never any audience in my mind. I don’t plan my stories. Writing for me is not an act of strategic decision-making. Stories come to me as they please, and I have little to no control of the content or form…

I do not choose what I write. I choose what I publish. Sharing stories about the totalitarian country, its mentality, and showing to the world the tragedy of this social condition might help resist and prevent it in other societies. Writing is intimate, solitary; publishing is social and political. My books, in this sense, are my arts resistance.

GTL: You write a lot about heroin abuse is everywhere in your stories, but I feel like you’re commenting on the abuses women suffer from drug users.

ZZ: Heroin addiction comes up in five stories in Iron and Explosion. I used to be an addict as a teenager so some stories come from those times. For the last twenty-something years I have been clean and into other things — love, death, birth, moving around the world, raising kids.

My new writing goes elsewhere. I’m working on a novella is set in Arizona; there are two short story collections, one set at an oil field in Kazakhstan, and the other takes place around the world. They don’t have titles yet, and it will be a few years before they are published. I guess the stories from my early life appeared first; now is the time for the new ones.

All people, women and men, suffer from the cruelty of the state: in my short story “Beast” the sadistic drug dealer Beast is as much a victim as his sex-slave Baby. He was sent to army at eighteen, wounded by war and prison — he didn’t choose to become a monster. When society is sick no one is immune to its madness. The executioners grow up next to the executed. The only way out is through — and art is one of the ways through.

GTL: Do you see some protest literature in the future condemning Russia for its treatment of drug addicts?

ZZ: I don’t think is what literature does. Maybe, journalism. Literature is not a tool or a weapon — it can be very powerful but if it targets a particular social evil the writer becomes a social warrior, not a thinker. To me, the writer is a medicine man, a shaman. I ask questions and make readers think and find answers on their own. Literature preaches not. It creates space for free decision making, for growth.

GTL: Women in Explosion sometimes see foreign husbands as a way out, but there is also subtle condemnation of American excess.

ZZ: My generation had to escape its home country — like many generations before and after. Five out of seven of my university group live in San Francisco Bay Area and one more owns a travel business in Nepal. My friends live in Australia, Germany, France, Cyprus, Israel — everywhere. I only have two friends who are still in St. Petersburg — they became extremely religious and nationalistic; we parted ways.

We had to find about any way to escape the destructive, toxic country that never changes its totalitarian and bloody ways. Well-educated people find job transfers, student visas, special talent visas, business ownership.  A poor girl from a provincial town, often with no skills and a baby, has less chances. All she has is her body. “Beast” is about girls like this. I have nothing but endless compassion for them — these women know what suffering is and often remain human despite of all odds.

As for American excess — I don’t think there is anything wrong with excess per se. Mass consumerism, though, and the lack of desire to think for yourself, alarms me. Complacency is as dangerous for a human spirit as poverty.

Condemn — I only condemn the manipulators of crowds, hypocrites who use others and build their ego empires on the blood and pain of others. Those I condemn.

GTL: Do you see yourself writing stories that are untangled from Russia, perhaps satire?

ZZ: Very much so — my partner, Simon Rogghe, and I are now staging stories from our road trip collections, set in New Mexico and Arizona. We are a union of two gypsy-writers. We often go on trips around the US and in summer go visit our families in Europe where we look for opportunities to perform in English. 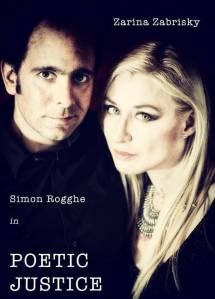 Each city, each town has its own flavor, different audiences, bring a new meaning to our work. Our tours took us to Pittsburgh, Cleveland, Tuscon, Los Angeles, New York, Paris, Lisbon and much more.We also write on the road as we go and end up with new poems and stories from different towns. Last year we stumbled upon Colorado City, a town of polygamists, and I wrote the story “Keep Sweet.”

This year we bumped into a pot plantation owner in Arizona and sang karaoke in a dive bar in a small mountain town in California, and Simon wrote the story “Roadkill.” I think if it were up to me I would never write about Russia. I left it twenty years ago; I think and write in English; I detest its government and mentality. I chose another world.

Satire is not something that interests me as a genre.  Satire is a defense. Laughter can be a powerful weapon for caricaturists and journalists. Literature, in my opinion, while retaining a sense of fun and funny, should dig deeper — into the roots, into the guts, deeper, deeper, into the deepest of the depth. Is the Divine Comedy satire? Crime and Punishment? Tender is the Night?

GTL: You allude to Pussy Riot in Explosion. Has sitting down and speaking to them changed the way you think about your art?

ZZ: I wrote “Heroines” at the time of Pussy Riot trial, in 2012. That was the moment of my awakening. Until then, for about twelve years of my emigration, I paid zero attention to Russia. When the young activists were thrown into prison, it was an insult to me as a human being and a writer. That’s why I organized my first-ever street protest — and very soon realized that this form of protest doesn’t work.

Meeting the Pussy Riot artist four years later was also an awakening to many truths, but not in a way you would expect. Heroes live in people’s fantasies. The young women I met were exhausted by imprisonment, many years of idle struggle, persecution, confused by the celebrity status and fuss, and lost the focus of their fight. Was it a disappointment? No. Because I respect their bravery and voice. But once again I know that art is far beyond activism. Activism is transient. Art is eternal.  I wrote an article about this sad and good experience.

GTL: As an artist, do you feel an obligation to say something with your art, since so many Russians, as expressed in Explosion, are voiceless?

ZZ: Yes and no. My writing comes from deep within and does not answer the social calls or represent anyone or anything. The only obligation is my inner necessity. If what I say resonates with people and makes them think — I am a lucky, lucky writer.

GTL: Zarina, thank you so much for answering my questions. I look forward to reading many, many more of your books.