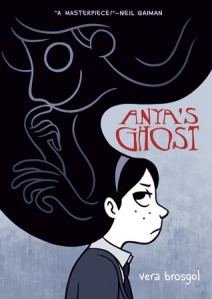 Anya’s Ghost (First Second, 2011) is the celebrated graphic novel by Russian-American Vera Brosgol. The book is the story of a teenage girl named Anya, who believes she has trouble fitting in at school. Her mother brought Anya and her little brother from Russia when Anya was five, just before Anya entered public school. Her best friend is Siobhan, an Irish-American girl whom I mistook for a boy for most of the graphic novel. Siobhan has short hair and wears a button up shirt and tie. The images aren’t detailed enough for me to tell just by looking at the girl. The story also focuses on Russian-American student Dima, a highly intelligent runty boy in Anya’s grade. The story is set in the U.S., and so the other students are all represented as American teenagers (i.e. blond, popular, don’t appear to struggle with popularity).

On her walk home from school one day, Anya falls into a well and discovers a skeleton is her only company. The skeleton belongs to Emily, a ghost who can only travel a short distance from her remains. After Anya is rescued, she discovers one of Emily’s finger bones got into her backpack, and now Emily is with Anya to stay.

It’s not so bad, though. Emily helps Anya do better in school by cheating on tests and feeding Anya lines to say to a boy after reading his schedule so Anya can “bump into” him. Emily is the best friend Anya’s had in a long time (Siobhan is a testy person who is mad at Anya just as often as she is friendly). But Emily is not exactly what she seems, and Anya may regret her new life with the help of her ghost.

Vera Brosgol inserts reminders that Anya struggles with her differences. When teachers try to call on Anya, they can’t pronounce her name: “Is there a problem, Miss… Br… Bor…” and Anya answers, “Borzakovskaya. No, ma’am.” The image suggests that the teacher isn’t working to learn her students’ names. Again, Anya has been in the U.S. since she was five years old and is now in high school. It’s not as if she entered the school year midway.

Emily points out that the Russian American students should stick together. When Dima is being bullied in the school lunchroom, Anya isn’t surprised; she predicted it when Dima kept answering all the questions earlier in class, which is a total “fobby” move–“fresh off the boat.” Emily asks, “Correct me if I’m wrong, but aren’t you both Russian?…Well, back when I was alive, your people were your family. You defended each other no matter what.” In this instance, Brosgol reminds readers that even individuals with something important in common can turn on each other in the name of seeming like a normal teenager.

But Anya can’t escape her mother. Whether it’s the greasy food she makes, which Anya hates because she’s worried she’ll get fat, or her mother’s misunderstanding of basic knowledge on the citizenship test, Anya is impatient with her round, bespectacled, independent mother and shows her about as much compassion as she shows Dima.

Though the story suggests the point is to get rid of Anya’s ghost, the real challenge is to get rid of all of her that is Russian. Anya tells Emily that she goes to a private school because Dima went there, and his parents wanted Anya to be there to befriend him. She laments, “It’s not fair! I got bullied for years for talking funny, I did my time in ESL, I don’t have an accent!”

Emily is mostly a vehicle to get Anya to experience American kids and see that they don’t have perfect lives, and that she actually fits in rather easily. Anya never realizes that her low self-esteem and anger is what keeps her from befriending the other kids, but the reader can see it happening. I enjoyed following Anya and watching her do regular teenager activities, especially since I’m reading from an adult perspective, one with my teenage years far enough behind me to be wiser, but not so far as to forget what high school was like.

However, Emily seemed pretty useless (other than being that vehicle). Her statements seemed simple and too easy: “Was it something I could have helped with?” Or, “And I think that Sean boy could really like you! You’re much more interesting than that Elizabeth girl.” I never felt like Emily challenged the reader–or Anya–except the part when she noted that Anya wasn’t helping Dima.

It’s possible that Emily is the sweet to Anya’s sour. Anya is upset about her weight, her nationality, her family, and her level of popularity. Really, she seems like a regular grumpy teen who is blaming all her problems on her Russian roots.

Emily is sweet, polite–a good little ghost girl, in contrast. In fact, I kept thinking of the little ghost girls in the animated movie Coraline. The longer Emily stays, though, the more the roles change. Anya is forced to become kinder and more compassionate as Emily demands more of her time on Earth.

The ending of Brosgol’s Anya’s Ghost seemed too easy. Anya’s changes were quick, and I felt for sure that if there were a second book that the depressed teen might go back to her sulking ways. The only growth I saw from Anya was when she tells Siobhan that she doesn’t want to share a cigarette because “[she] doesn’t think [she] ever liked it. And it doesn’t look as cool as [she] thought it did.” Perhaps Anya will change her sad attitude with some careful reflection.

In the end, Anya’s Ghost is a speedy read. There are more images than words, so I was able to get through all 221 pages in about an hour. So, even if you feel hesitant about reading this book, you can enjoy it without a huge time commitment.