Who Am I? by Megan Cyrulewski 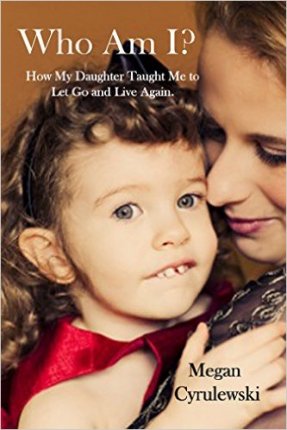 Who Am I? How My Daughter Taught Me to Let Go and Live Again is a memoir by Megan Cyrulewski (Black Opal Books, 2014). In her book, Cyrulewski details meeting Tyler, a man with Narcissistic Personality Disorder (Cyrulewski diagnoses him herself), marrying him, and having his child. Cyrulewski moves out of her home two weeks after their daughter, Madelyne, is born and into her parents’ house. Tyler verbally abuses Cyrulewski, calling her crazy, a joke, and says she is incapable of caring for herself because she always runs to “mommy and daddy.” The majority of Who Am I? describes all the drama that ensues. The book includes word-for-word emails and texts messages from Tyler, Cyrulewski, attorneys, and Tyler’s new wife, Heather, and cites some passages from a textbook about mental health.

The purpose of Who Am I? is not clear to me. Based on the title, I thought this book would be about Cyrulewski’s life with her daughter, but Madelyne is so young (she’s 3 at the end of the memoir) that I don’t see how Cyrulewski had a relationship with her daughter that shaped her. She only seemed molded by her responses to Tyler’s outbursts, mockery, and lies. I’m not sure at what point the author “lets go” to “live again.” We see almost none of Cyrulewski’s life before Tyler, so I’m not sure how she lived before she met him. In her acknowledgments section, she apologizes to her parents for her rebellious teen years. What kind of person was she, and how did she change, I frequently asked myself.

The tone of Cyrulewski’s memoir was one that irritated me. I constantly felt like we were best friends and Cyrulewski wanted gab my ear off to get her side of the story out before Tyler could says his, something that would corrupt how people saw her. Meanwhile, I’m meant to just sit and ingest her problems while she gives me nothing emotionally nourishing in return for having listened. The writing itself is very talkative and defensive, so on the one hand, if you like having a friend with dramatic events constantly occurring, then this book is for you. On the other hand, if all the drama drains you emotionally, if you wish the person talking would use reason instead of feelings to navigate her life, then this book will wear you out, like it did me. When Tyler writes an e-mail to Cyrulewski making several claims, she writes back to him and refutes his points, one by one. She writes:

And don’t EVER judge how I am raising my daughter saying things like I’m punishing Madelyne. At least I’ve been there for her 24/7. Where the fuck have you been? Oh yeah, playing games and writing “poor me” letters to Charlotte [a court employee]. You will never EVER understand that when you are a parent, your child comes first because the world revolves around Tyler and it always will. Madelyne is so smart that she is going to see through your bullshit when she gets older. Don’t be surprised if she doesn’t want a relationship with YOU because of your temper, narcissism, and the way you bullshit ALL the time.

This is the last of six paragraphs. I could hear Cyrulewski in my head. I could hear the same arguments I’ve heard over and over from parents who argue about what it means to be a parent, who make threats. I couldn’t help but think the author was terribly juvenile at times. I would image her as a young 20-something based on her commentary. During a supervised visit, Adam, the director of the facility where Cyrulewski and Tyler meet, asks her questions. Cyrulewski doesn’t like his questions. Adam says, “I know Tyler wants to see his daughter.” The next line reads, “Yeah, Adam. You’re right, I thought to myself. You know everything about your new best friend Tyler, don’t you?” Despite her situation, Cyrulewski is suspicious, childish, and emotionally exhausting. The author is not a girl; at this point Cyrulewski is in her mid-30s and attending law school, but she’s still hurling insults via text back and forth with Tyler and his “white trash” new wife while in class. I kept thinking, “JUST. STOP. ALREADY.” Cyrulewski mentions that once Tyler is out of her life she can finally stop checking her email 100 times (her number, not mine) per day. Why check? Why seek out problematic situations?

While it’s clear that Tyler is emotionally abusive and Cyrulewski is the victim, a good memoir needs to read like something more than a chat session. It needs to be introspective; there’s none of that here, which left tons of space for me to just dislike the author’s story and the person she is in it. Cyrulewski details events like she’s trying to make a journal log of sorts as evidence. The whole book is about evidence: emails, video, getting out the correct story first. It’s a race really: Cyrulewski vs. Tyler. Even though Cyrulewski had anxiety issues before she met Tyler, even though she ends up in a psych ward 3 times, readers don’t get to see what happened there, how Cyrulewski processed her feelings, or how she felt when Tyler abused her. She asks again and again why she married Tyler because he was so obviously abusive, but she can’t fully answer, nor does she look back and see how perhaps she got to her current situation. Instead of digging deep, the author spews out how she literally responded to Tyler instead.

The ending makes at attempt to explain what this memoir was about. Cyrulewski adds:

I think there is still a nasty stigma attached to PPD [postpartum depression] and that is why women are still afraid to admit that they might be suffering from it. I think a woman who seeks help for PPD is extremely brave and is stronger than she might realize. It takes an extraordinary amount of courage to admit that something isn’t right about the way you feel toward your baby.

For me, the last attempt to add some meaning to Who Am I? was too little, too late. Cyrulewski finally ends up with who she is–Madelyne’s mother–but the road to becoming a mother is littered with Tyler stories that there was no room in the book for what kind of mother she is when she is with her daughter (playing, feeding, anything). There are important issues broached within the pages: verbal abuse, PPD, and not understand how a typically smart person becomes a victim. Yet, the topics aren’t as carefully handled as they need to be to make an impact on readers, as events alone just aren’t enough. The book was one I was happy to finish so that I could move on and escape its reality TV-like self-creating drama.

*I want to thank Megan Cyrulewski for sending me a copy of Who Am I? How My Daughter Taught Me to Let Go and Live Again for review at Grab the Lapels in exchange for an honest opinion.