I also want to thank the blogger at Ana’s Lair for reviewing Once A Goddess and Fiery Arrow as part of this tour!

To learn a LOT more about the first book, Once A Goddess, check out Sheila’s last virtual book tour!

About Fiery Arrow: Brigid, a gifted druid priestess, seeks to preserve Ireland’s ancient religion when Christianity broaches its shores. When she confronts Patrick, the charismatic leader of the newly-arrived Christians, she realizes they have a shared history, tied together by a bond formed lifetimes before. As Brigid persists in reminding him of their past and of his promise to help her revive the Ancient Ones, Patrick denies the deal he made as a lonely slave boy to a goddess he believed to be only in his imagination. 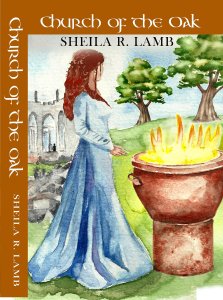 About Church of the Oak: When Brigid starts a rigorous druid training school called Cill Dara, she’s threatened with a lifetime of slavery. In order to survive, she must span two cultures and two faiths when the Christians and druids decide to teach their students together, an undertaking that places her in the priest Patrick’s path once again. Fifth-century Ireland is the backdrop for their turbulent lives, a place where history and myth live side by side.

Sheila Lamb received an MFA in Creative Writing  from Queens University of Charlotte and an M.Ed. in Curriculum and Instruction from George Mason University. Her short stories have earned Pushcart and storySouth Million Writers Award nominations. She is a writer-in-residence at the Weymouth Center for the Arts and Humanities and is a fellow at the Virginia Center for the Creative Arts (VCCA). Sheila is the author of the Brigid of Ireland historical fantasy series, which tells the story of Brigid as goddess, druid, and saint.  Sheila has traveled  throughout Ireland and participated in the Achill Archaeology Field School. She loves Irish history, family genealogy, and is easily distracted by primary source documents. She lives, teaches, and writes in the mountains of Virginia.