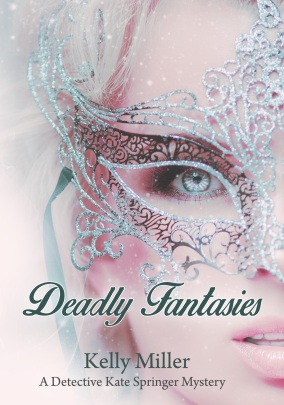 Deadly Fantasies (Black Rose Writing, 2013) by Kelly Miller is the second book of the Detective Kate Springer series. The author assured me that I didn’t need to read the first book for this one to make sense, and she was true to her word. Detective Springer gets a call after midnight from her former shrink. The connection is bad, but Dr. Nina Grace says, “I think I killed my husband.” Detective Springer and her partner, Detective Patrick Jessup, are on the case, but everyone questions if Detective Springer’s past relationship with the good doctor will cloud her judgment.

I don’t read too many detective novels. I either find them terribly clumsy and cliche, or, in all honestly, too hard to follow. It seems like crime authors want to make it so hard to figure out “who dunnit” that the plot gets convoluted to the point of confusing. Kelly Miller’s novel avoids both of these problems, and I found myself really enjoying where the story took me. Each scene is laid out carefully and in chronological order, as if the reader is actually following along with the detectives. It’s a really short time period (Friday through Tuesday), but each day is packed full of interviews and evidence. In terms of the ending, I didn’t know who did it, nor did I trust any character on the suspect list fully, including Dr. Grace, which is what keeps the novel moving ahead. Trusting Dr. Grace is one of the key issues because the entire story is told through Detective Springer’s eyes, and we’re not sure if she isn’t biased.

What really kept me reading wasn’t the plot (at first). Really, I kept reading for the dialogue. Deadly Fantasies is a dialogue-driven novel, and Miller keeps it so natural. Just seeing how the characters would talk to each other was often funny:

Back at the squad room, I dropped Detective Jung’s keys on is desk. “Thanks for letting me borrow your car. I owe you one.”

Jung looked up from his computer screen, eyes bloodshot. “No problem.” It looked like he hadn’t moved in the three hours I’d been gone.

“Have you seen Patrick around?” I asked.

“Good talking with you, Jung.”

This is a rather simple scene, one that I like because it shows the distracted nature of a detective who has been working far too long without making too much fuss over his appearance or demeanor. Also, he’s not out doing high-speed car chases or having gun battles; the work is realistic.

In another scene, Detective Springer tries to break the tension between her and her partner:

“We’ve just started the investigation, and you’ve already convicted her.”

“No…I…haven’t. Unlike you, I simply haven’t found her innocent yet.”

Unwilling to jump on that merry-go-round again, I threw out a trivia question, trying to diffuse Patrick’s uncharacteristic anger. “Eight presidents were born in one state. Which state was it?” Questions like these were our little way of passing the time, taking our mind off a particularly craptastic event, or just showing each other our dumb side.

Patrick practically exhaled my name. “Kate, I’m not in the mood.”

“What’s going on with you?”

I stopped talking, deciding to wait him out. Patrick had seen me in an interrogation room. He knew I could outlast him.

Patrick’s angry outburst shocked me. I didn’t know what to say. “So…you don’t know which state was home to eight presidents?”

The awkwardness seen here gives the character life. Detective Springer acknowledges that they can be dumb, but she’s also a tough individual who can get information. When things get personal, her not knowing what to say shows that she isn’t a flimsy, perfect character–that she is, indeed, a person.

And, best yet, she doesn’t go into nurturing-woman mode. Deadly Fantasies is one of the least sexist books I’ve read in a long time. The men and women are not cliches, but people with individual concerns. Detective Jessup is the one concerned about children and family, a role typically left for women. No one even brings up kids to the main character. Women and men are equally likely to be bad guys, good parents, or even awkward.

Overall, Deadly Fantasies by Kelly Miller is a must-read. I couldn’t put it down, at first for the dialogue and later for the plot. My only hesitance come from the title and cover; both indicate that this is a “chick book,” which didn’t make me too excited to read it. I was worried it would be full of cliches and “simpering” characters; however, Miller’s novel is an excellent choice for male or female readers.

*I want to thank author Kelly Miller for sending me this novel in exchange for an honest review. I have no personal, familial, or professional relationship to this author.

Deadly Fantasies is currently on sale for $0.99 at Amazon until June 23rd! Also, the author is giving away one copy of the e-book free! Comment on this post for a chance to win. Be sure to include your e-mail address. The drawing will take place Friday!