A new post from The Guardian called “No Men Allowed: Publisher Accepts Novelist’s ‘Year of Women’ Challenge” was published June 11, 2015. In this article, you can read more about what different groups–in this case, a publisher–are doing to give more attention to women in publishing and reviewing.

Kamila Shamsie, the author who challenged publishers, said, “So there’ve been a host of interesting suggestions: a women in literature festival; a commitment to ‘genderless’ covers for novels; a strategy to specifically address the gender imbalance of books submitted for literary prizes. All of which sound good to me – we need as many suggestions as possible to counter the depth and breadth of the problem.” 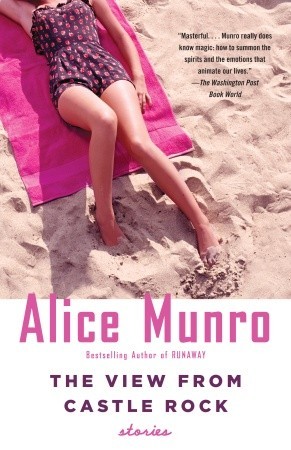 Have you looked at covers for women’s novels? The concept of a genderless cover seems a long way off. As is, the covers of women’s work make me sad, to be honest. According to Carey Dunne of Fast Company:

If you take a look at the cover of Alice Munro’s latest Nobel Prize-winning short fiction collection, The View From Castle Rock, you probably wouldn’t guess it includes stories about cholera, the death of an infant, and domestic abuse. The cover, featuring pink lettering and a neck-down shot of a woman suntanning on a pink towel, suggests it’s a breezy summer read—and not one meant for men.

The View from Castle Rock won the Nobel Prize in Literature, but when you look at the cover, do you feel like it invites men to read this award-winning novel? And if men aren’t “invited,” what are the chances of them taking fiction written by women seriously?

In grad school I took a class on children’s literature and discovered that books for girls were much more likely to be hot pink, baby blue, or lime green, and they typically had food, like cupcakes or ice cream on covers that most likely included shiny silver font or glitter. Yeesh. Of course, this was a decade ago, and things have changed. Now I see a lot of floating dead girls, women without heads, women doing sexy things, or a close up on lips (weird).

How many books do you read by women? What trends in covers do you notice? How likely is a cover to draw you in? Would you ever complain to a publisher about the cover of a book you enjoyed reading?