Our Orbit by Anesa Miller 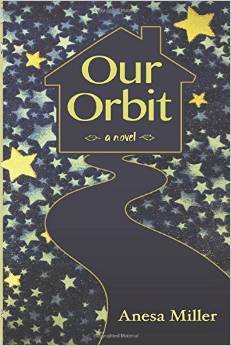 Our Orbit, self-published in 2014 by Anesa Miller, is a novel about a family of fundamentalist Christians that gets broken up when the mother dies in a car accident and the father is taken to prison. The novel is set shortly after the Oklahoma City Bombing (circa 1994 or 1995). Although one son is already married at 20, the three younger children–Josh at 18, Rachelle at 13, and Miriam at 8–must discover new lives in the aftermath.

Our Orbit had a tendency to make me doubt the author’s construction of the characters and then feel very sorry I ever did. For instance, the mother of the foster family with whom Miriam is sent to live begins like a cookie cutter of a woman who feels her biological children are superior and that the new girl will never be as good, smart, or beautiful. The mother, Deanne, thinks Miriam “seemed small for a nine-year-old. And ill-proportioned: with sloping shoulders, arms that barely passed her hips, and knobby legs dotted with scrapes. Her hair was pulled into a thin braid that ran down the back of a threadbare dress. Quite a contrast to Deanne’s own children, who people often said could land modeling jobs if their parents wanted to circulate photos….It’s not looks that matter, Deanne reminded herself, irked at the satisfaction she couldn’t help taking in the differences.” I hated Deanne instantly and foresaw many problems in the future: blaming Miriam for missing items, claiming Miriam is lying, giving Miriam the responsibility to watch the foster parents’ children (aged 5 and 18 months) and then being angry when something goes badly. However, Deanne seems ready to jump into a barking snarling mess before anything even happens:

The letter was signed by social worker Edith Ames and dated almost a month before. It listed the addresses and phone numbers for Isaac and Joshua, as well as Rachelle, Melanie, and Daniel Winslow. The final paragraph stated, “Sibling relationships are important. They are often the longest lasting of a person’s lifetime. We urge you to arrange regular visits for your foster child with his or her biological siblings.”

“There’s the wicked sister [Rachelle] you’ve been wondering about. Looks like she with another branch of the family. Who knows how many Winslows are lurking in the backwoods of Jersey County?”

“I will. It’s just a bit much all at once. Can we at least wait a week before we start visiting all these people? My folks are coming on Sunday. I’m totally swamped.”

“I don’t suppose another week will damage the relationship irreparably.”

In this example, I can almost see Deanne’s claws come out, and I am exhausted by her personality and how anti-poor/hillbilly/other her stance is. But, Miller takes great care to allow her characters to grow. Just when I think I’ve pinned someone down as a stereotype and have plotted out all their future moves in my head, the story went in a different direction, keeping me hungrily reading pages and pages.

Our Orbit is quite a long novel (294 pages according to Goodreads, but 399 individual pages according to the copy sent to me), and so a lot of characters appear. Some minor characters also had children whose names were provided, which seemed unnecessary and made me worry I would need to remember them, but the big cast is hard to forget. One character I never fully understood was Bekka Weaver, who entrusts a male teacher with her deepest secrets, including her positions on sex and marriage (imagining a male teacher and female high school student alone and talking about personal information is unthinkable to me, especially considering he is not the school counselor, and recalling strict codes of conduct between faculty and students).

The two clearest characters are Uncle Dan and Aunt Melanie Winslow, who love their nieces and nephews as best they can, despite failing health. Uncle Dan gets stuck in his recliner and fumbles with the lever, though he can’t get it right, and he’s convinced that the scars all over his stomach are not only from his time as a solider, but also from when the aliens pried the wounds back open. Aunt Melanie is a large woman, a diabetic, who eats pie when she can and has a twang to her voice that does not sound contrived, as her words aren’t only made to sound like hill folk, but has expressions match, too. At one point, Miriam’s foster father, during a conversation with Aunt Melanie, catches himself mimicking her accent and phrasing to her:

“This here’s my medicine water.” Sure enough, a label with the words HEALING WATER was taped under the spout. “I’d give you a glass, but this here’s for blood pressure. I’ll make you some special for headaches. Bring it to you on Sunday.”

“That’s real good of you,” Rick said. A trace of the Winslows’ twang crept in. “Very nice of you,” he corrected himself, not wanting to mimic.

There are some minor wording issues with the novel that occasionally took me out of the story. The word “you” cropped up in several places in which it would make more sense to continue in the character’s point of view, which would require “he” or “she.” When Miriam arrives at her foster home, she considers her siblings: “Born in this big house, [the Fletcher children] lived like children in a bedtime story. Which made you want to teach them something about the world.” Every so often, there would be a brief tense issues, such as “He folded the letter into a small square and put it, along with the photo, in the breast pocket of his shirt. He was still wearing that shirt today.” Then, there was a sentence that combined both issues: “The rest was boilerplate. Fighting in school is unacceptable. Suspension is mandatory. Another interaction will get you expelled.” I’m wondering why I’m going to be expelled, and why the book is suddenly happening right now. These moments that took me out of the text happened every so often, but were not egregious enough to make me feel permanently displaced.

Our Orbit is a compelling story altogether. Without telling any spoilers, I will say that many characters have events in their pasts that could cripple them in the present, so I was constantly looking for the second shoe to drop on all these unsuspecting people. Looking for the moments when information bombs could drop was a lot of fun, though Miller doesn’t let the plot become contrived; some bombs are more like small splats, and others aren’t bombs at all. Definitely a recommended read.