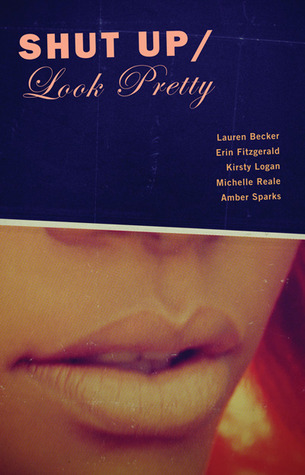 Birthed from the loins of Tiny Hardcore Press comes Shut Up/Look Pretty. The text gives spaces to five chapbooks in one, all by women. Each author gets her own section and table of contents. This design is one I haven’t seen before, but the switch between authors makes a big difference. Unlike an anthology, there are enough stories per writer to get a strong sense of her style, but unlike a single-author collection, there is no room for fluff pieces that clearly aren’t the author’s best work. I loved the concept and sisterly vibe created in this shared space.

Not all stories are solely focused on women despite the authors’ (and Tiny Hardcore’s editors’) gender. “Local God,” a fifty-six page story/novella by Kristy Logan centers on a male narrator and his rock band. There’s alcohol & women & bars, but all of the characters surprise, even the minors. Men and women shift gender roles, hiding behind the expectations of titles: lead singer, lesbian, nerd, friend. And the story is funny: “All his songs are about politics and fucking, sometimes both. I could do that. Hell, I bet the girls who lost the pole-dancing competition could do that.” Even when the band members discuss women, their antics are amusing. From lead singer Francis: “‘Be honest now.’ He bends over and fumbles in his bag, then fixes something to his face. ‘Do you think she’ll fuck me if she sees me in these glasses?'”

In contrast to Logan’s long piece, Lauren Becker delivers twenty shorts with brevity in sentence structure. In “I am Very Lucky,” the narrator attends her brother’s wedding. She recalls, “My brother’s bride started toward me with a bride’s smile. She looked at my dress. She would tell me I looked beautiful. She went to my brother and said that I had to leave.” The bride’s warmth contrasts the short, terse sentences, and there is some characteristic of the narrator the reader is not aware of. This first-person narrator returns in other stories, evoking sadness with her simple-mindedness and innocent nature when she is used by others: “Before I could pull the door closed and tell the driver my address, the man from the wedding settled me into the backseat and climbed in beside me. ‘Give him your address, sweetheart.’ And I did.” She has no intentions in her obedience.

Erin Fitzgerald’s sixteen stories vary quite a bit. “Where Did It All Go Wrong?” convinces that there are unknown evils among us when we find out that a mother stories a child she found in her car’s trunk. The mother discloses, “I opened my pursed and pulled out a little bag of Goldfish. They were on sale at Safeway. I’d had a coupon. The Goldfish were bright rainbow colors….I threw them into the trunk as hard as I could.” Fitzgerald’s style changes in “Booking Number 2409756,” a series of letters to Lindsay Lohan from someone named Erin. Erin’s humorous theories: “I saw this on a coffee mug: ‘Friendship multiplies happiness and divides grief.’ The best way to deal with grief is to divvy it up fair and square. This is my piece. It’s a corner piece, which is why it’s extra chewy. Get your own.”

Michelle Reale’s twenty-two shorts read more like poetry in some cases, varying the tone of the collection yet again. One motif appears to be American women with foreign boyfriends: “He would stand for nothing less than agreement. Food separated and congealed on plates like small colonies, only to my eyes, they took over the world.” Sometimes the images are less clear at first and must be put together: “They sky is gathered wool laying too close to their faces, their breath burning the small spaces between their lips and their disgraceful mouths.”

Sparks’s stories comprise the last section of the book where she explores death through ghosts, decay, vampires, angels, suicide, and burial. “For These Humans Who Cannot Fly,” by far the most intriguing story in Sparks’s section, describes a man who builds temporary resting places designed to house the recently deceased and a twenty-four hour watchman who makes sure the dead has actually expired and will not regain consciousness and need assistance. The narrator’s occupation twines with the story of his wife’s suicide—she thought she was a bird a leaped out a window in her mental hospital. The narrator only visits her in the hospital once: “My wife spent the visit tilting her head and chirruping at me in frustration. She finally ran at the only small window in the room, so many times that her head was bloodied and her hands and arms bruised all over.” it’s difficult to cover all of the strengths of Shut Up/Look Pretty and do justice to each author. If you’re curious about this book, and you should be, the shorts (some only one page) are perfect for reading in small time frames, or you can enjoy a whole collection in one sitting. Either way is an intimate reading experience, one that shifts gears and entertains.