Caskets from Costco by Kelly Wilson 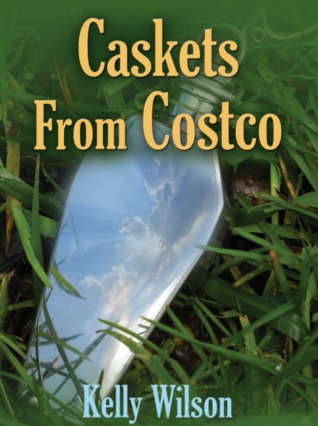 Caskets from Costco is a memoir that begins with the death of the author’s father-in-law and circles its way back to the author’s traumatic experiences through two births and then makes connections to her abusive father. Interspersed throughout are moments Wilson shares with her therapist, Hannah, as they explore these events and how they are related.

The reason for the order of events in the book, which are not chronological, are made evident during a scene in therapy. Wilson doesn’t want to start at the beginning, which would include her father, because it’s hard. She circles her way from ending to middle to beginning. Based on the setting–counseling–I get that the hardest issues must be worked toward. From a reader perspective, though, I missed out. I never quite knew where Wilson was coming from. When her father-in-law dies in the beginning, I feel little remorse because I don’t know anything about this man. He could be a jerk, or distant, or completely wonderful for all I know–but I don’t know.

The majority of the book is consumed by the author’s difficult first pregnancy and birth. I was wrapped up in this part of the book and kept turning the pages to see what would happen. Wilson details how she begins to feel like something is wrong, but she is only 7 months pregnant. When the author details her concerns about calling a doctor and if she gets there and find she’s wasted the doctor’s time, I both related and felt for this young woman who was scared. After the baby is removed by c-section, Wilson spares the reader no details, not about her stitches or drain tube or what it’s like to feel like a cow whose sole purpose is to bring a premature baby food so it doesn’t die. That’s right, so it doesn’t die–both Wilson and her premature son almost died.

During this same time Wilson explains how her friend had a stillborn baby, and then later becomes pregnant with twins, one of whom dies. Suddenly, it seems like death is everywhere in the book, and I’m making the connections between the father-in-law and the babies and other friends who have died. But, shortly after the birth of her son (I mean pages, not time), Wilson and and her husband decide to have another baby, even though they’ve been warned there’s a 50% chance something would go wrong.

This is where I begin to lose the threads of the book. Although their first baby is a year old when the young family is again expecting, I didn’t see any reason why the author would want to do the whole thing over again. The descriptions of the first pregnancy and the terrifying culmination in near death was still ringing in my ears when baby number two was decided on. There weren’t even scenes of the new baby at home and the parents watching him or talking about him or even playing with him. At that point, I didn’t care anymore. I didn’t want to read about a second scary pregnancy when the decision seemed both fast and foolish. Wilson wonders why some babies die and others don’t; I kept thinking about how Wilson could die. Or, what if she makes it through the birthing process of the second child and dies, then it would be two children with no mother. The whole thing turned off my emotions to the author’s plight. As the person holding the book, I ask, why was a second baby necessary? The author’s emotions and reasoning are nowhere to be found.

The last section of the book discusses Wilson’s childhood and how her father would expose himself or hide video cameras in the bathroom hamper. It’s only at the end of the book that the author reveals that when she was a teenager she was dating a young man, Jeff, from her town, but Jeff is away at college, so his parents have an extra bedroom. Jeff and the author do get married, so readers realize that the people that took her in are her future parents-in-law when her own family abandoned her. This information would have been useful in the beginning of the book when Jim’s death occurred so that I would feel something of his kindness and respond with sadness–or at least feel sympathy for Wilson’s sadness. She moves in with Jeff’s family almost 200 pages after the father-in-law’s death, so the warmth of a family helping a girl just trying to make it was lukewarm.

There were funny moments in the book that made me keep reading, even when the situation was serious. When Kelly Wilson explains her decision to see a counselor, she points out, “Counseling was not a new concept for me–in college, counseling was free, and I’ve always loved a bargain.”

Wilson also touches on some important aspects of mental health, such as how we resist treatment in this particular field, but not in others:

When I have a headache, I don’t analyze it. I don’t ask the headache why I’m suffering with it at the moment or wonder how long it will be there. I don’t blame the headache for all of my troubles. I don’t think about the merits of ibuprofen, if I should take it or not, or question whether or not it will work. I take a few ibuprofen and get on with life. Not that depression can be boiled down to the simplicity of a headache; but every time I think about taking medication for depression, I think about how soon I can stop taking it.

Wilson goes on to think about how depression or mental illness can change a person forever, that there is a real fear that it is a permanent part of the person who has it:

“Which makes me think that depression is a mental illness,” I said. “And I wonder who I could have been without it.”

“I don’t like that,” [my husband] said. “That’s saying that who you are now is not valuable. And I don’t believe that.”

I cried harder at that. I realized at that moment that depression and I will always be linked, tugging back and forth, like the drunken uncle who still gets invited to the family reunion even though everyone knows he’s going to make a messy scene.

While some work with organization could have given the memoir a more meaningful message, overall it is often funny (despite the subject matter) and engages with the problems that the average person may encounter. Caskets from Costco is a far cry from the memoirs that describe decades of the most brutal sexual assault or dependence on heroin or alcohol, like many memoirs I’ve read, which I find refreshing. It’s a memoir from which a person may nod in recognition instead of stare at like a horrific car accident.