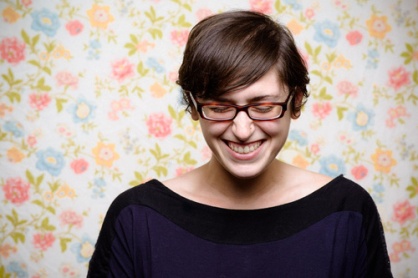 Thanks, Laura, for answering my questions! You can learn more about Laura by clicking any of the many hyperlinks below, which lead you to her poems, website, and blog.

Your book of poems, The Bone and the Body, forthcoming from BatCat Press this spring, will be handmade. To you, what is the significance of handmade books? What does it all mean for writer and reader?

I really love reading books that are well-designed, whether digitally or handmade. For me, the object is part of the reading experience—the book is its own little house/body, and how it looks and feels matters, especially with poetry, which cares about form and shape. Handmade books allow a greater amount of freedom in design, like Matthew Mahaney’s Your Attraction to Sharp Machines (BatCat, 2013). Mahaney’s book folds out into three sections with pockets, invites you to open it and explore the ephemera within. My intention in writing is to evoke a feeling in the reader, and book design can help the reader take up residence in the headspace of the book. The design for The Bone and the Body hasn’t been finalized yet, but I think the content and form open up possibilities for its physical form—the landscape is full of slippery locales and different kinds of home spaces. I’m excited to see what BatCat does.

One of the most popular tags on your blog is “muppeting.” What is that all about?

That one started as a joke. I make a lot of faces, some of them mopey and sad, and a friend of mine described me as a muppet, and it stuck. My Twitter name is @themuppetface, and I started tagging blog posts that were sad or nostalgic or sentimental. Sentiment, in my writing and in my person, is something that I’ve thought a lot about and struggled against and tried to embrace, hesitantly. During my first college writing workshop, the professor told me that my writing was melodramatic, and it took me years to realize how gendered and condescending his statement was. I spent those years thinking that writing shouldn’t be emotional, that it shouldn’t care too much. Reading Anne Carson’s Glass, Irony, and God made me think a lot about female voice and what we deem worth listening to: “It is confusing and embarrassing to have two mouths…The doubling and interchangeability of mouth engenders a creature in whom sex is cancelled out by sound and sound is cancelled out by sex.” —Anne Carson, “The Gender of Sound.”

A lot of people talk about MFA factories churning out carbon copy writers. What are your thoughts on us MFA folks?

There have been so many think-pieces on this subject, and I don’t see how any one person is capable of describing all MFA programs unless they have somehow magically attended all of them. Even then, they’d have to have attended all of the programs right now, since they’re so different from the programs of the 70s and 80s and 90s. Actually, this magical person is probably James Franco. My only absolute feeling when it comes to the MFA is that you shouldn’t pay for it. I spent four years in Alabama for my MFA, surrounded by the best group of people I’ve ever known, writing and thinking and being influenced and stubbornly resisting advice and basically receiving a studio art degree. I would never assume that every other program out there is the same, or make a sweeping statement.

I also think there’s a lot of anxiety about how many programs there are and how many writers they’re producing, that this will somehow muddy up the creative waters. But would those people not have been writing anyway? And who does it hurt that they take themselves seriously? And what would we lose if they did not? I read plenty of poetry from writers that do not excite me at all, who follow the status quo, and who are lauded. So who gets to say what is good? I’d rather see the full spectrum.

How have you developed creatively (pre-, during, and post-MFA days)?

I’ve been lucky to be able to spend time writing for a while now, and lucky to have family who support a life spent in the arts. My mother’s mother was a painter, and many people in my family play music, and that has all influenced me creatively. Much of my writing thinks about visual art, specifically or generally.

I also started out as a prose writer, strangely enough. I wanted to write short stories, and that same fiction professor who complained of my melodrama suggested that I should write poetry (not meant as a compliment, of course). And then I did, and I realized poetry had so many more open doors for me. As a reader, it is so much more visceral. During my MFA I stopped writing by hand because I realized typing allowed me to write at the speed of thought, and that was one drastic change. Over the last few years I’ve also thought a lot about the writer/reader relationship, which is something that I was able to have conversations about during grad school. Now, outside of that community and away from those conversations I’m trying to figure out how to continue learning on my own. I’ve always loved reading, but it takes on a new significance.

Your poems in [Pank] magazine are connected—tied together by the titles, “circle of salt” and “to the woman in the woods”—and include a date in the title. What is the deciding factor in creating clusters of poems?

Part of it is that my brain works that way, thinking through an idea or a question over the space of multiple poems or an entire book. I never know how long it will take me, though. When I started writing the poems in The Bone and the Body, I was just following my nose. I got saturated with that speaker and her feelings, and I researched folklore that I had only known peripherally, and I kept finding connections. That’s a thing that I love about writing, the way it spins out and back through itself. I love reading poetry that makes me think. Going back to your question about creative development, one thing that has stuck with me from my MFA is a literature class I took on the theory of allegory, which is much more complicated than I had previously believed it to be. What if allegory is an act—a verb, not a noun? It’s about bringing the whole text together in the reader’s mind, so that the meaning inherent in the words really only exists in the reader. And you need time and space to make that happen, hence the long poems and poem cycles.

Is your cat ever a bastard, and do you write about it? Why do so many poets have cats?

This is a great question. I often refer to my cat as a “little jerk,” because he sits on my face when I’m trying to sleep, or yells at me for moving if he’s sitting in my lap, or jumps into the trashcan (that was before we got one that locked). But he’s also sweet and funny and loving and toothless and forgiving and warm. He likes to spoon, and every once in a while he lets me be the little spoon.

I have written about him a few times, though it’s hard because I always feel embarrassed for writing about my cat. There’s a poem in my recently completed manuscript that’s kind of about him and kind of about orcas and ownership over bodies, and how impossible that is. A former roommate of mine also definitely based a gremlin-like character in her novella on my cat, so he’s pretty much an experienced muse. That’s probably why so many poets have cats. They’re such great muses. And they keep our laps warm while we huddle in our heatless apartments.