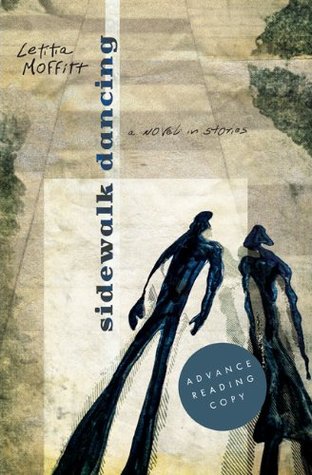 *I’d like to thank Dan Cafaro for providing me with a copy of Sidewalk Dancing after I gave him some grief for not having more books by women coming out of Atticus.

Letitia Moffitt’s Sidewalk Dancing has a description to prepare you for the style: it’s a novel in stories. Just like any other collection, the stories have different narrators, tones, and points of view. The novel starts from the point of view of Grace, a Chinese woman with a knife obsession waitressing in California. She’s often described as small, seemingly angry and cold, driven by hard work and the desire to be alone. The father, George, a white man from Pennsylvania, rarely gets to tell his own tale. He is an impractical dreamer whose projects, like a house shaped like a starfish, rarely work out as intended. Mostly, the story follows Miranda, Grace’s and George’s daughter whose description closely matches the author’s.

Grace and George meet, they marry, have Miranda, and move to Hawaii to live in George’s personally designed starfish-shaped house. Moffitt is a minimalist story teller; she doesn’t explain why the two marry or move to Hawaii. She does reveal that Grace doesn’t want to be touched and likes smoking and pacing in the backyard, which made me wonder how Miranda ever came into existence. Instead of love or passion, Grace seems driven by truth, which is an interesting thread Moffitt explores: what does truth mean, and how valuable is it? As a young adult, Miranda moved 2,000 miles away to New York City. When Grace calls, Grace mentions that Amy Tan came out with a new novel, and that Miranda could do something like that, since she is the daughter of a Chinese immigrant, just like Tan.

“All her books are best-seller. All about Chinese mothers and daughters–really, really good. Her mother, I think she must be always so proud,” Grace says.

“Yeah–unless her mother didn’t care for the way she was depicted.”

“Oh no, Amy Tan is very respectful writer. She don’t say the bad, only say true.”

Moffitt made me think here about what Grace really means. Does she imply Amy Tan leaves out anything bad about her mother and includes only true things that are good? Or does Grace mean that what Amy Tan says can’t be bad if it’s the truth? Moffitt, later in the story, implies Graces means the former.

When Miranda attends a church summer camp with her friend Roxanne, she is asked, “Which kind of lie is worse, the lie you tell others, or the lie you tell yourself?” Miranda can’t answer the question at this alien church camp, but later reveals that the answer is truth. “And truth turned out to be worse than any lie, told or believed: it wasn’t as interesting, and it still didn’t get us anywhere.” It is in this moment that Miranda realizes why her parents seem like strangers: her father dreams, but his dreams don’t come true. Her mother believes and goes along with her father, but is frequently disappointed when he says things will work out and they don’t. And is this the same as lying? Moffitt’s book forces readers to consider what is the truth–and just beyond white lies and truth bending–but what it means to let people down over and over again when you thought you were thinking big, thinking differently. In a sense, Moffitt’s Sidewalk Dancing makes creativity seem like the enemy, which I found both perplexing and, to some degree, realistic. George’s starfish house is poorly designed, his boat that he builds sinks, his bid for mayor fails, and no one really knows why he brought his young family to Hawaii (on a whim, perhaps?). George is both inspiring and a danger.

Moffitt also explores human connections. Not once does she bring up technology as a way people are missing real connections, which would be an obvious one, but the way the characters in her novel can’t reach out and actually touch someone. Grace tells George not to touch her, which is one of the painful moments of the book, especially since George seems like a do-gooder creative type. Miranda, working in an office in NYC, has a plant between her and co-worker Tyler. Their big moment of intimacy is when Tyler coughs in Miranda’s face and gives her the flu. Not only is this disgusting (especially if you’re reading the book during flu season like I did), but Miranda sees recovering from the flu as her “purpose.” This is where Moffitt’s book takes a strange turn. If the back of the book didn’t say Miranda moved to NYC, I wouldn’t have known. Her move is preceded by a drastic change in her looks (like she’s going into Witness Protection), and the reasoning is never given. She’s worried someone might recognize her (2,000 miles from home??). Miranda becomes very dark, and the chapter in which the flu happens stands out drastically from the others, to the point that it seems like it doesn’t belong. Miranda feels she has nothing to live for, that the city is full of zombies, and that her flu gives her purpose; once she’s healed, she’ll be “dead” again because she has no reason to live. Her job only makes it worse; Miranda works for an insurance company, so she knows very personal information on paper, but, again, she never meets these humans.

The “cure” (I think) is when Miranda meets Carl, a man who wants to insure his car but must admit that all his income is from disability because he has AIDS. Thinking he is both living and dead, Miranda briefly becomes obsessed with learning more about Carl after he cancels his policy. His answering machine is the voice of another man saying he’ll get Carl’s messages to Carl, but for Miranda, this isn’t good enough. She’s finally reaching out and making a connection.

So what changes in Miranda that she is distant and then fine? This is where the novel feels a bit short. Character motivations are often missing unless I really, really read into things, which might be what Moffitt wants. On the other hand, readers who are looking for some smoother answers that don’t include constant guess work might be repelled by the gaps in plot. In a way, the majority of the book lives in the present; you’ll miss Grace’s horrible past, George’s motives, and much of Miranda’s feelings between childhood and adulthood that get her to NYC (they’re all implied). Here is where I begin thinking about reader wants/needs and author intentions. I think Letitia Moffitt does quite a balancing act, one that I haven’t witnessed before that looks quite like this.

In the end, readers find that sometimes we don’t know why we do things, which Moffitt calls “sidewalk dancing,” and really, it makes perfect sense as a way to explain her characters:

“…two people walking toward each other on a sidewalk will, in their attempts to get out of each other’s way, naturally move in tandem, like dancers, until they collide. Sometimes, they stay that way, perpetually in each other’s path, never moving past each other. And yet, what an odd moment of sameness between two strangers (and, sometimes, a witness)–a moment that may go on indefinitely, until they’ve forgotten where they were going (it no longer matters where) and come to believe that they are moving together instead of against each other.”