According to my reading list for June, I was supposed to read Modern Manners for Your Inner Demons by Tara Laskowski. However, after getting several pages in, I found too many annoying hiccups to keep reading. The narrator couldn’t decide if he/she was male/female, and the advice wasn’t really written in Emily Post style, as the synopsis implied. Instead, I picked up another novella-length work called Domestic Apparition by Met Tuite, which I bought in December 2012. 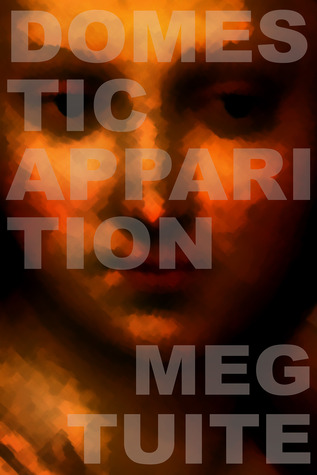 Tuite’s novella was published in 2012 (so I must have bought it right when it came out) and is 152 pages. It’s set in Skokie, Illinois starting in the 1970s. Conveying the dark humor of her situation, narrator Michelle makes huge jumps in time and focus in each chapter, giving space to discus her three sisters, certain friends, parties, and jobs as she gets older. In the first chapter she is six, and in the second chapter she is fifteen, for example. We end when she has a job after college, meaning the stories are more focused in the teen years. The narrative has an arc, but the chapters don’t smoothly transition, which is a stylistic choice.

Right away, the snappy, witty sentences caught my attention. In the first chapter, the narrator emphasizes how ridiculous her first-grade teacher at the Catholic school is:

After lunch and regulated nap, Mrs. Pufry would suddenly lurch up out of her chair and stumble toward the supply cabinets, like some hideous, reanimated corpse, and hurl herself around the room throwing out instructions, crayons, and construction paper, and panic, forcing an art deadline on all of us.

I love the imagery and unusual verb choices (like “hurl”) to vilify the teacher and put readers on the side of the narrator, Michelle. I do also notice the misuse of punctuation, especially between coordinating adjectives and complex sentences, which is a problem throughout, so heads up on that. I’ve copied all quotes in this review as they were written in Domestic Apparition.

One aspect of Michelle that I found confusing was how her interests would change drastically and without context. Early in the book she’s describing her interest in the ambush bug, which “kills termites and arranges their dead bodies around the remaining nest of termites, then waits for the others to come out and inspect this camouflage of curiously silent neighbors before it descends on the parade of dupes with deplorable ease.” Here, I appreciate Tuite’s use of alliteration to give the writing a punchy delivery.

However, later, high school-age and at a house party, Michelle mentally points out, “. . . but the paintings in this place were the real thing. I could tell by their frames . . . The first floor seemed to be from another century. It had dark, Baroque looking portraits lined up along the walls.” Is she an amateur insect enthusiast or a teenage art history scholar? I found this confusing. Sometimes, I thought the narrator changed and I hadn’t noticed.

In the end, I didn’t really relate to Michelle and found the big leaps in time prevented me from getting to know her. However, I did enjoy several scenes that describe things in ways I hadn’t read before, which made me enjoy the story and laugh out loud. When Michelle’s mother gets a call from the police saying they have Michelle in custody, her mother’s response is priceless:

Are you sure you have the right girl? I mean this seems a bit deranged, if not impossible, for a sober girl to leave the house less than a half-hour ago and suddenly a policeman finds her pooping like a dog in someone’s yard completely soused?