Jolie is Somewhere by Alana Cash

I’d have a hard time myself finding any of the above offensive, but I want to stick to my content warnings, like I promised. Today’s review is about the self-published novel Jolie is Somewhere by Alana Cash (you can Meet the Writer!). Technically, Jolie is Somewhere is a sequel, but you can read it without having read the first book, Saints in the Shadows, another self-published novel from 2014 that I reviewed and loved. Cash sent me her new novel because I had told her that if she ever wrote a follow-up, I wanted to read it. 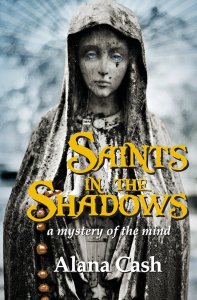 Jolie is Somewhere is about a young, attractive white woman from Oklahoma who moves to New York City (the reasoning isn’t clear to me, but NYC is a dream for many). There, she finds a roommate right away — her name is Electra. Jolie lands an opportunity to shoot a commercial, so to celebrate, she and Electra go out drinking. But having imbibed too much, Jolie pauses to throw up in an alley . . . when suddenly she feels someone trying to lift her skirt. So, to defend herself, she nails him in the thigh with her high-heeled foot, only to end up in prison. The man is a police officer, and Electra has failed to give her account of what really happened (was she jealous about Jolie’s commercial?). In prison, Jolie’s nose is broken by the inmate Axes, and the expensive lawyer her dad paid for never contacted her. Eight months later, Jolie is suddenly returned to the streets of NYC in the winter without a home or a clue. She sleeps in a dumpster where she is discovered by employees of a nearby coffee shop. This sets Jolie on a strange path on which she meets Lina, the psychic from the first book, Saints in the Shadows.

Lina meets big important clients in her home to do psychic readings, but she doesn’t charge them. Instead, they give her gifts or advice about the stock market, and sometimes money. She masquerades as “Madame Budska,” but she tells Jolie she isn’t really psychic. She reads body language to find out what a person wants her to tell them. She speaks in code and encourages her clients to do so as well. There are no crystal balls or elaborate drapery, but Lina does dress up as Madame Budska, which includes a wig and outfit. I’m never sure why she does this if there are no other theatrics. Based on Saints in the Shadows and Jolie is Somewhere, I gathered Lina is someone who takes in young women who need help, but it’s always in exchange for helping Lina. The help Jolie gives places her in settings that teach her about herself.

If you want to be a more empathetic person, Jolie is Somewhere makes you think more about the people around you. Deep down, Jolie wants the four people who let her down or hurt her to get their comeuppance. This isn’t a revenge tale, though, and she doesn’t want these four dead like we always see in movies. It’s empathy that helps Jolie let go of her deep anger, a lesson I need to work on continuously. I especially appreciated one comparison that shows racial, moral, and class division. Jolie, from a modest/poor family, remembers a serious boyfriend from a wealthy family whom she dated back in Oklahoma. She remembers how he wanted to study together and let her write his papers in college. They were together for two years, until they weren’t. Later, Jolie observes:

In jail, the women had talked about their boyfriends and husbands, even their pimps, and it wasn’t hard to make the link between their relationships and their incarceration. For their lovers, these women transported drugs and drug money. They concealed weapons in their apartments and lied to the police. They stole food and wrote back checks. And they took care of their babies while their men drank up or shot up the rent money.

Jolie’s memory of her old boyfriend using her juxtaposes the relationship women in prison had with the men in their lives, and I could see how Jolie judged those women, even though Jolie was knowingly being used, too — and likely subjected herself to it for similar reasons.

Not only does Jolie is Somewhere emphasize empathy, but it made me reconsider how I judge fictional characters. In Oklahoma, Jolie lived with her dad, a train engineer, because her mom divorced him, married a wealthier man, and had a son with the new husband. She basically tries to erase all traces of Jolie so as not to be embarrassed by her former life of near-poverty. The mother pops up throughout the novel to scrub out the existence of Jolie, and I kept thinking: Why is this woman working so hard to be a terrible person? I figured I was meant to hate her, even if she seemed over-the-top, but the more I considered the mother’s situation, the more I realized I know people who try to start new families and detach from old ones. That new family unit, and possibly the security that comes from it, can be shattered if folks from their “former life” keep reappearing. Me connecting some dots gave Jolie’s mother’s character more depth.

What I like most about Alana Cash’s two novels is that Lina’s presence makes things work out. The characters she encounters won’t always be happy, and sometimes they learn a hard lesson, but it works out. Since real life burns a lot, learning through a novel that things will be okay feels like learning how to trust again, and if there’s trust, there’s reason to go on. My only concern is that Lina is wealthy, so the books implies that those with wealth can or should fix those who do not have any. Bits of generosity with cash here and there didn’t bother me, but some big gestures — and lots of them at once — really stood out.

Overall, I recommend this book. Cash’s writing is “quiet,” but her main characters are easy to connect with, and Lina’s psychic abilities (are they real, or is she just reading body language?!) give the story a magical feel. I will caution you that since this is a self-published book, it doesn’t have the super clean editing that you find in traditionally published novels. There are also one or two very small details that contradict, which you could miss if you’re not paying close attention.

*I want to thank Alana Cash for sending me a copy of her book in exchange for an honest opinion. In an earlier version of this review I had accidentally titled the book Jolie is Everywhere. The correct name is Jolie is Somewhere.