Coming of Age in Mississippi by Anne Moody

Anne Moody’s autobiography, Coming of Age in Mississippi, was originally published in 1968. I wanted this book to see if I could get an entirely different, yet still intensely personal, side of the time period compared to Malcolm X’s autobiography, published in 1965 shortly after his death. Malcolm lived exclusively in the North, whereas Moody was only in the South. Moody begins with her first memories and ends in her 20s at a church a group singing “We Shall Overcome,” wondering if they ever will. She has relationships to Medgar Evers, Emmett Till, and other famous activists.

I hadn’t heard of Anne Moody before I saw her book on the shelf at Barnes and Noble. Most famously, she was one of the protesters who participated in a sit-in at Woolworth’s.

Before that, she was a little girl who grew up poor, constantly changed addresses, gained a new sibling every year or two, and could barely get the clothes she needed to go to school. Moody worked most of her life, too, serving mostly in white people’s homes. When one racist white woman locked the front door so Moody would be forced to enter in the rear (which social norms required of black folks), Moody banged on the front door until someone else let her in. She was never subservient, though you could argue she was lucky. She saw friends and family shot, burned alive in their homes, and dragged in the woods to be stripped naked and beaten, all at the hands of white Southerners. Moody had anxiety that would earn her a Xanax prescription, plus some.

Moody is always aware of what’s really going on, even when other black people aren’t or won’t say anything. When Moody’s town gets a new high school for black students, everyone rejoices, but she points out, “As most of them, students, teachers, and principals alike, were bragging about how good the white folks were to give us such a big beautiful school, I was thinking of how dumb we were to accept it. I knew that the only reason the white folks were being so nice was that they were protecting their own schools. Our shiny new school would never be equal to any school of theirs.”

Moody did well all through school and participated in many sports. Unlike many of her peers, she went on to college. At the time, a black student had to attend an all black college (no, Betsy DeVos, it wasn’t a “choice”). Soon, she was involved with the NAACP, which got back to the whites in her hometown. Since any hint of discontent among black citizens can easily lead to an uprising, and Southern whites know that, Moody’s membership was enough for white folks to harass her mother and ask her what Moody was doing, what her plans were, if she were coming home (she couldn’t; she would be killed). In fact, Moody worked so much for so little for the Civil Rights Movement that many times she nearly starved or was murdered.

My favorite aspect of the the autobiography as a genre is that it doesn’t try to add “flavor” to real-life events. Things aren’t reflected upon creatively; the writer needs to simply tell what happened. Moody does not add her own agenda into Coming of Age in Mississippi even though it’s her book. She doesn’t tell readers what to think about racism, but what she thought about racists during the time. Unlike Malcolm X’s autobiography, which clearly looks back from a time in the future (like when he writes about not being good at boxing as a teenager, which he believed as an adult was thanks to Allah, who kept him from “getting punchy”), Moody’s story is always in the moment. I respect this careful erasure of Moody the writer, and the focus on Moody as a girl, college student, and activist.

Moody’s book also taught me details of the Civil Rights Movement of which I was not aware, even though I’ve studied and taught the time period. For instance, when a house full of activists hear through the grapevine that a group of whites are going to kill them that night and block all the roads out of town, the young men and women lay out in the yard all night in long grass. It’s wet, hard, and they’re all shaking in terror. I felt like I was there with them. Moody’s family also turns on her quickly so they won’t be killed. Her favorite grandma treats her like a stranger. Later, I learned that in one town where Moody leads a group of activists that black people have most of the land and make up most of the population. However, land and crop contracts are only given to white farmers, so the black farmers sit on cropless land and nearly starve to death. Furthermore, I knew that activists were constantly arrested, but Moody explains that they were packed into a truck and locked in, after which the driver would crank up the heat on a 100+ degree day and leave them in their for hours until people freaked out or nearly died. When a headless black body is found, the colleges do room checks to see if it’s one of their students. The Klan shared pamphlets door-to-door with a blacklist of certain people (Moody’s picture appears on their list). This is the stuff you don’t get in your history textbook.

One thing Malcolm X and Anne Moody definitely had in common is they did not look to Dr. King for guidance. Malcolm complains King is an “Uncle Tom,” a sit-down Civil Rights activist (a play on the term for protests called sit-ins). Moody goes to see Dr. King at the March on Washington and comes to a conclusion about the black movement’s so-called leader: “I sat on the grass and listened to the speakers, to discover we had ‘dreamers’ instead of leaders leading us. Just about everyone of them stood up there dreaming. Martin Luther King went on and on talking about his dream. I sat there thinking that in Canton [a Mississippi city deep in poverty due to racism] we never had time to sleep, much less dream.” While we’re always hammered with Dr. King in school, his philosophies and actions didn’t sit well with many activists.

The most intense part of Coming of Age in Mississippi is the anticipation. Will Moody make real gains as an activist? Will she be able to return to her hometown? It’s a book that makes readers lean forward, so to speak, so the 424 pages of this mass market paperback fly by. The only complaint I have is Moody’s frequent mention of Reverend King, who is a minister from the South who helps activists. He’s the only white person she trusts, but it’s easy to confuse his name with Dr. Martin Luther King, Jr. 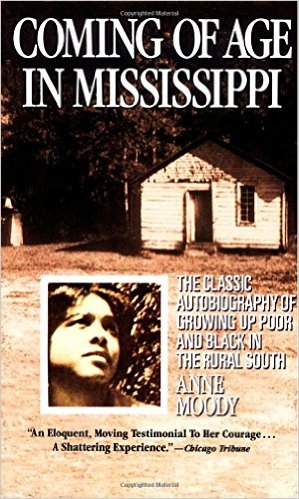