I want to thank you Anne McCarthy Strauss for sending Grab the Lapels this reviewer’s copy in exchange for an honest review.

I’ll be the first to admit that I have a preconceived notion about what romance novels are and aren’t, regardless of whether it’s actually right or not.  When I started reading A Medical Affair by Anne McCarthy Strauss, I was somewhat convinced it might be a sappy girl-gets-the-guy story with lots of fluff and drama.  For the first chapter or so, I seemed to be right; the character of Heather was seemingly perfect physically and was instantly attracted to our other main love interest, Jeff.  They met when she had an asthma attack that landed her in the hospital, into his care, and couldn’t keep each other off of their minds.  I was very happy to be wrong, as both Heather and Jeff were well fleshed out as real people, both of whom, at a certain point, I was rooting for.

At a certain point in the story, the narrative turns and makes it obvious that this isn’t about love; this is a story about what is ethical and right in regards to doctors and patients, something I had never put much thought to before.  The point that hits home is that it’s unethical to have a romantic relationship with your doctor while they are still your doctor.  Strauss, the author, had done painstaking research in creating a fictional story that mirrors what can (and has) occurred in real life, involving lawsuits and the legal aspects that can go into people being violated by doctors. 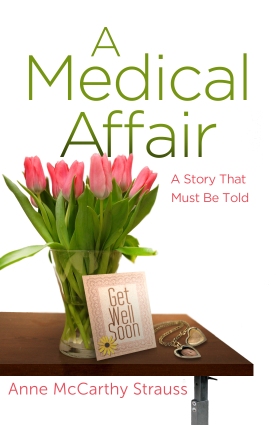 The narrative style of the story is mostly well composed; the perspective is third person semi-omnipotent, switching focus mostly between Heather and Jeff, with another character as needed for the plot.  Precisely why the author chose third person semi-omnipotent is unclear to me; while it works well enough for the book, it could have just as easily been switched for first person with little lost.  While the perspective focuses mainly on Heather, I thought it was clever that the author used other points of view to better see the situation in a larger sense.

There were a few points in the story during which I questioned the relevance; Heather occasionally brought up her Christian religion, the fact she wore prayer beads, and that Heather and Miguel (her best friend) stopped at Mass before going elsewhere.  In the spirit of Chekhov’s gun, I was pleased to see this was later relevant in the plot development between Heather and Jeff, although I won’t give away why here.

The author of the novel is a victim’s advocate, and according to her website, has spent the last decade educating people about the hazards of these types of relationships.  With this book as a tool to get the story of the potential consequences out in the public, I’m sure she’s informed many more people of the problems that can occur when you’re not careful.

*Caitlyn Faust graduated from Saint Mary’s College with a BFA in Studio Arts. By day, she works at the University of Notre Dame as an IT Help Desk Consultant. By night, she has many interests, including knitting a pair of socks originating from yarn dyers from each state (that’s 50 pairs of socks, folks).