Lindsay Starck is a student, teacher, writer, and excellent chef and baker. Lindsay and I attended the University of Notre Dame as candidates in the MFA creative writing program from 2008-2010 where I had the privilege of reading early drafts of Noah’s Wife. I want to thank Lindsay for responding to my questions and congratulate her on her first novel! Please check out her website where you can find more information about this exciting new read. 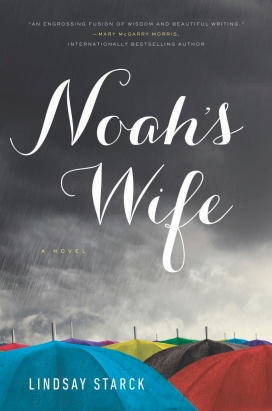 In the beginning it was not raining, but it is raining now—and steadily.

And so finds Noah’s wife when she arrives in this gray and wet little town where it’s been raining for as long as anyone can remember. Driven by her desire to help her husband revive the congregation, Noah’s wife is thwarted by the resistance of her eccentric new neighbors and her failure to realize that her husband is battling his own internal crisis of faith.

As they strive to bring the townspeople to the church—and keep the strains on their marriage at bay—the rain intensifies, frustrating their efforts. Soon, the river waters rise, flooding the streets of the town and driving scores of wild animals out of the once-renowned zoo. As the river swallows up the houses, the telephone poles, and the single highway out of town, Noah, his wife, and the townspeople must confront the savage forces of nature and attempt to reinforce the fragile ties that bind them to each other before their world is washed away.

Full of whimsy and gentle ironic humor, Noah’s Wife is a wise and poignant novel that draws upon the motifs of the biblical flood story to explore the true meaning of community, to examine the remarkable strength of the human spirit, and to ask whether hope can exist even where faith has been lost. 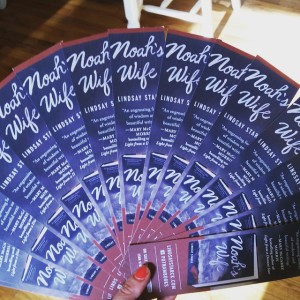 How did the conception for Noah’s Wife begin? How did it come about?

I’ve always admired works that bring minor characters to the forefront. I’m thinking particularly of Tom Stoppard’s Rosencrantz and Guildenstern are Dead and Sena Jeter Naslund’s Ahab’s Wife, both of which imagine rich and complex lives for characters who were mentioned only in passing in their source texts (Hamlet and Moby Dick, respectively). I wanted to write a novel full of so-called minor characters who possessed voices and lives of their own and who were struggling with their sense of their identity. How much of our sense of self is defined through our relationships with others? This is what I wanted to explore.

What was some of the more helpful advice you received while writing your novel?

The most helpful advice I received was simply to keep going. I felt close to giving up on the book many, many times, and so the affirmation and support of friends and early readers was really important.

You workshopped Noah’s Wife at the University of Notre Dame and turned it into your thesis. Can you tell me a bit about that experience?

As I think you can see by the novel, I’ve always been more interested in character and voice than in plot, per se. My colleagues at Notre Dame really helped me improve those elements; I often reread their comments and incorporated their suggestions as I worked on later versions. We didn’t talk as much about conventional “plot” in workshop, and when I sold the novel, my editor said that’s what was missing. There was very little tension, no momentum. That is what I struggled with over the next few years. And yet the characters and the language are what originally piqued her interest… those elements are still the core of the novel, and for those I am deeply indebted to my cohort.

Were there ever any especially frustrating moments when you felt like this book wouldn’t happen?

Oh, yes! All the time! Three very long years passed between the day I signed a contract with my publisher and the day when the novel was finally pronounced complete. During that time, I rewrote the entire book– more than once. I had to delete whole characters, come up with new story lines. I was always worried that my editor would lose patience and rescind my contract. I would send the latest version to her, believing it was perfect, and a few days later I’d receive a letter with pages and pages of critique. I’d decide that I wasn’t a good writer and that I might as well quit; I’d usually cry and go to bed early. The next morning I’d get up and open a new document and start all over again.

How did you balance writing Noah’s Wife with other writing projects? Or were there no simultaneous projects? Sometimes scattering your attention can be hard!

Noah’s Wife has demanded the majority of my creative energy, but I’ve also been writing lots of literary criticism for my doctoral degree. I chose to study modernism because it feels like an era in which creative writers were also creative critics. People like Virginia Woolf, T.S. Eliot, and Ezra Pound were writing novels and poetry but also a huge number of reviews and essays; they were reading each other, editing each other, publishing each other. My experience in English programs–first as an MFA at Notre Dame, and now as a PhD candidate at University of North Carolina at Chapel Hill–has led me to conclude that these days there is too much of a divide between creative writers and their critics. The two are not at all mutually exclusive; writing well and reading well go hand-in-hand.

Is there anything you are especially proud of in your new novel? Any particular moments that we can read?

I’ve always loved the Prologue, which is one of the few sections that have remained unchanged from the first draft to the final version. Two other chapters that I really haven’t touched since writing them the first time are chapter 10 (where we meet Dr. Yu’s father) and chapter 20 (where we meet Stan and Nancy). They were easy to write, coming naturally and quickly. I love them both! Here is a sample from Chapter 10:

He has been spending his days over the past few months making trips back and forth to the library to check out books on the twin arts of illusion and escape. He stacks the volumes up around the edge of his desk, on the floor, constructing a small wall that he likes to think will help hold him in place as he pores over the tricks, the effects, the sleights of hand. He studies the diagrams and then tries to reproduce them himself, darkening the shadows with the flattened graphite tip of his pencil. The sketches never look quite as perfect or as professional as they do in the books, but this is the best way he can think of to memorize the many steps of the tricks. The collection of drawings is especially helpful once he must return the books to the library. He has always been a visual learner.
The other day he found a box of his wife’s colors and brushes in the cabinet below the kitchen sink and sometimes when he is feeling particularly brave or inspired or foolish he thinks about adding a few strokes of watercolor to his images. He goes to the sink and hunches down and stares at the paints between the pipes for several long minutes. Then he shoves the cabinet door shut and retreats to his office where he shuts that door too, and he rests his head on the desk and waits for the feeling to pass.
He cannot bear to touch the paints, or the perfume, or the pearls that are left still coiled on the armoire. He cannot bear to open the closet door and see her coats or her dresses and so he does not open it at all. He wears button-down shirts and corduroy slacks from his dresser and sometimes he wishes for his tweed blazer but it is in the closet and so what is there to do? He must live without it. What is one more loss, he wants to know, among so many?
Life is one big disappearing act. Things vanish all the time. 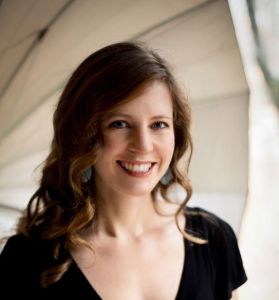 When does Noah’s Wife come out, and where can readers get it?

The novel will be released on January 26, 2016, and it will be available from major booksellers and independent stores across the country. Right now it’s available for pre-order on Amazon!