She Drove Without Stopping by Jaimy Gordon

Phew! I survived! Jaimy Gordon’s second novel, She Drove Without Stopping, is both dense and long. It took me 19 days to finish, which for a blogger trying to keep up on content is forever. Fortunately, I had some other reviews scheduled during this time already.

If Jaimy Gordon sounds familiar, it’s because I love and rave about Bogeywoman, which is also a dense book, but the main character spends most of her time interacting with some of the best-written minor characters I’ve read. Bogeywoman is also 100 pages shorter than She Drove Without Stopping. 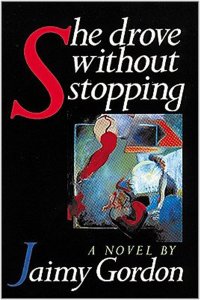 In this novel, Jane is born the happiest baby in the world. It’s obvious to readers that something is amiss between her parents, especially the father, who likes to squeeze Jane’s bare buttock from the time she is an infant through high school. As she ages, her father sees her more as a creature that a person. The relationship is toxic, and I’m sure there are odd layers of sexual power battles in there to be picked apart. The narrator implies her father may be gay, though he’s a womanizer. It’s complicated.

Jane heads off to some “beatnik” college circa 1965 where she can’t sleep in the dorms, so she finds an abandoned house to squat in. Along comes a boyfriend, and it’s implied that he’s got a financial net from his parents, but he lives like he’s homeless. He’s an artist, man. Some stoners and junkers from the area, known as The Soul of Commerce, befriend Jane and her boyfriend, and Jaimy Gordon shines again with her secondary characters and their dialogue:

Felix says, “A chicken ain’t even a bird.”

“Felix is silent for a moment, gazing at the darkening cornfield. “It’s a food,” he says. “Man done made it, just like a hot dot. Like baloney. It’s progress.”

“Don’t tell me about progress,” Willie says. “Baloney don’t run around a barnyard flapping its wings.”

Gordon takes us back to the tradition of people sitting on a porch and sharing what they know: stories, observations, old-timey remedies, gossip. These are the best moments in the novel, though they didn’t happen as often in She Drove Without Stopping as it did in Bogeywoman.

Another key difference is that She Drove Without Stopping is in 3rd-person. The narrator is heavy handed while trying to explain what Jane’s motives in life are. The last chapter is in 1st-person, and I felt like I knew Jane infinitely better in those final pages than anywhere else. Bogeywoman was done so well and richly in 1st-person that I felt a million miles away from Jane — and I didn’t like nor empathize with her. I do wish there had been less focus on Jane’s internal life via an omniscient narrator who almost seems to not know Jane.

The novel says a lot about how women and minorities are treated in the United States. Many characters Jane befriends are African American or Native American. She herself is white, but she’s the victim of power dynamics between men and women, authorities and women. When a strange man forces himself on her, Jane is not believed by the local police, who work to prove she’s a whore for hanging out with a Black man.

Given that it’s 1965, Gordon says a lot about that year without directly point out what happened in history that year. It’s a clever way of saying something without saying it. I’m especially thinking of the way I keep reading novels that are set in NYC when 9/11 happened, but 9/11 is only tangentially related to the story. Or, how many civil rights novels find the main character marching to Selma or at the March on Washington. Do they need to be there for this novel to say something about the Civil Rights Movement?

Although it takes patience and perseverance, Gordon’s second novel never made me want to quit reading, though I didn’t read for as long as I typically would each sitting. It’s a traditional Bildungsroman with the ending we all must learn — that we are just like our parents in ways we don’t want to be — but it’s all the people whom she encounters who make this novel interesting.