Content Warning: brief anecdotes or mentions of attempted suicide, infant death, drunk driving, incarceration, depression, homelessness, sexual abuse, substance abuse and addiction, violence, a professor becoming involved with a graduate student, and fear for one’s safety. There is also a book cover with a naked breast below (though I don’t feel nonsexual depictions of anatomy should require a warning).

Please don’t let the content warnings chase you away from this one. You’ll miss the whole point if you do. The Misfit’s Manifesto is a brief book by Lidia Yuknavitch, whose TED Talk was expanded and published by TED Talk books in 2017. I haven’t seen the TED Talk; I purchased my book at a reading Yuknavitch gave at the University of Notre Dame just this month.

I’ve been following her works since around 2006 when her experimental fiction book, Real to Reel, was assigned in a graduate class I took. In 2012, I read Yuknavitch’s famous memoir The Chronology of Water the day it came out, all in one sitting, and then drove that night to Chicago to see her read. It was an amazing night; the audience was smaller and met in a studio space in an old rickety building with death stairs. I got to talk with her all night and we had dinner. She touched my long hair a lot (and when I reminded of this at the reading just recently, she seemed apologetic. I told her not to be).

At the Notre Dame reading, Yuknavitch read “Woven,” a braided narrative that took my breath away. After, when she took questions, I asked why her short fiction, which I’ve read, seems so different compared to her writing style in her memoir, and, I assume, the novels she’s been writing since. The author explained that after she gave birth to a stillborn baby, she was crazy, became homeless, kept a notebook and wrote scraps of lines in there, lines that looked to her like hieroglyphics, but lines that she later determined were bits of story. Those bits of stories became her early books, like Real to Reel, Her Other Mouths, and Liberty’s Excess. I confess these short works are hard to get through and a challenge to read. I’ve yet to read her novels yet, which include Dora: A Headcase, The Book of Joan, and The Small Backs of Children. 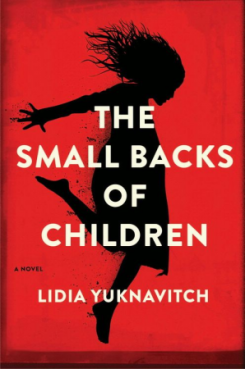 I had nervously arrived at the reading 90 minutes early and read about 1/3 of The Misfit’s Manifesto while I waited. It’s a sturdy little hardcover book with thick pages and beautiful artwork by Alex Brewer that is both abstract and perfectly fitting with the content. It felt like the book that I needed in that exact moment. A book that speaks to what I call “squirrliness,” from which I suffer. I even had a dyshidrotic eczema flare up at the time.

After the reading was a party at my old thesis advisor’s house, where Yuknavitch and I compared ways we are misfits: she spends parties hiding in the laundry room sniffing dryer sheets, and I lock myself in the bathroom. We both leave parties without saying goodbye. We both teach in prisons. Yuknavitch said (and I’m paraphrasing) that we are spirit sisters (or something like that; I know she used the word “spirit.”).

In The Misfit’s Manifesto Yuknavitch invited her friends to contribute. These passages are italicized and include women of color, veterans, a trans man, and abuse survivors, among others. Each discusses what each feels is the definition of “misfit.” However, Yuknavitch begins the book by defining what a misfit is not and then what one is:

All of the content warnings above comes from brief mentions of things that have happened to Yuknavitch or her friends who add their own voices. Nothing is terribly descriptive, so I don’t want the content warnings to scare you away, but to give you a head’s up. If you want a much more detailed version of what happened to the writer, read The Chronology of Water.

The only part of The Misfit’s Manifesto that threw me for a loop was how much Yuknavitch emphasized that a misfit doesn’t have an occasional bad day. They are not the people who wear mismatched socks with pom pons on them. It’s way deeper (and I would add more permanent) than that. But at the end, she attempts to close the “gap” between “normal” people and misfits. Why do this? She writes, “. . . stop trying to jettison us [misfits] away from you. We are you.” She goes on to give several examples of her misfit behaviors: DUI, expressing anger using sex, drinking too much, eating a bottle of pills after her baby died, living under an overpass. She ends, “I’m the part of you that you don’t want to admit is there.”

I started to ask if misfits are born or made. Can someone “normal” be a misstep away from misfit? Based on her writing and my experiences, I’d argue that a misfit is shaped over many, many years and made out of context. So, this part — chapter 6 out of 9 — confused me and made me feel like much of what Yuknavitch argued about misfits before was being, in some way, contradicted. Maybe she means we aren’t rejects, just different, thus we are everyone else, too?

Overall, The Misfit’s Manifesto is an important book that provides space and a voice for people who struggle every day in ways that aren’t fixed when we’re told to “calm down” or reassured that “everything will be okay.”