“No one is happy in the inbetween,” said Gemm. “Not even selkies.” 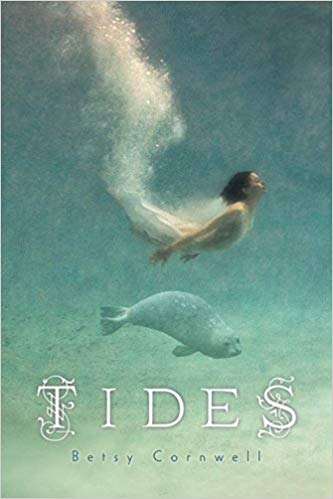 So begins the first chapter of Betsy Cornwell’s debut novel, Tides, a new young-adult fantasy set in modern New England. For a story steeped in folklore and romance, this beginning sets the tone for a simple message that unifies its protagonists and relates to young audiences. No one – mystical or human – can remain in limbo for long, caught between dreams and reality, truths and lies, duties and desires. You must make a choice. And in order to make that choice, you must know who you are and honor who you choose to be.

Be that as it may: I came out of Tides as a bit of a fan. A cautious fan, a fan with some reservations, but a bit of a fan nonetheless.

First, the story: High school senior Noah Gallagher and his younger sister Lo are spending the summer at their grandmother’s cottage on the Isles of Shoals off the New England coast. It doesn’t turn out quite the way they expect, however; the discovery of their grandmother’s lover, a mysterious woman named Maebh, is the least of the surprises that await them. For here fairytales are fact, and Noah’s chance encounter with a strange swimmer leads him into the world of selkies – seal people who can shed their skins and become human – and a relationship with a young woman, Mara, who straddles the “inbetween” of land and sea. As Noah, Mara, and Lo come to understand each other, they learn more about themselves, what they believe in, and what is worth fighting for.

Cornwell is a beautiful prose writer, infusing an uncomplicated plot with lyrical narrative that brings to life a vivid landscape where it is easy to believe in legends. Her multiple narrators tell a story of family, love, and belief that readers will find familiar but with a 21st-century spin. With a delightful balance of courage and casualness, Cornwell tackles contemporary issues that thus far have rarely been touched in this genre. She sidesteps the typical sci-fi/fantasy trap where leading ladies must be born leaders, witty banterers, and confident superwomen –not to mention dead sexy – from page one in order to “keep up” with their male counterparts. Her women are humans (or selkies) first, neither rejecting their gender nor being defined by it; they have real struggles, insecurities, desires, faults, and improvements. In my opinion, the greatest service current authors can give their double-X readers is to portray their female characters as people – not goddesses, not damsels – and in that regard, Cornwell has delivered.

Cornwell is breaking relatively new ground by incorporating a lesbian couple as major supporting characters in a fantasy novel for young adults. While the LGBTQ community is more represented in all genres now than in previous decades, it still is unfortunately uncommon to see same-sex couples play prominent roles in the sci-fi/fantasy realm. But Cornwell does so organically, gracefully, and without exploiting the characters or defining them solely by their orientation. She focuses not on the “novelty” of attraction between two females but on the depth of love between two people. In the true essence of her story – of love transcending boundaries – Cornwell stresses the insignificance of convention next to the power of connection, all without drawing undue attention to the unconventionality of the situation. Nicely done.

As a writer and a thinker, Cornwell is firmly established. As a storyteller, she has some room for growth. From the first few pages, the plotline was familiar to the point of being predictable, following the standard YA fantasy romance pattern almost to a T: Teen #1 begins life in new location, Teen #1 meets Teen #2 in unorthodox way, Teen #2 reveals true yet impossible identity, Teen #1 believes and must prove loyalty to Teen #2’s kind; love and adventures ensue (see Twilightfor further examples). Though featuring selkies (rather than vampires or, I don’t know, merpeople) was unique, Cornwell forfeited the creative opportunity to bring us something totally new from the mythological realm. Additionally, the characters’ lack of individuality dulled any real attachment I might have felt for them. Despite fascinating and well-rounded backstories, their voices remained veiled by the intricacy and poeticism of the text; in an effort to let her own voice shine through, Cornwell sacrificed the potential connection between reader and character. For a story with multiple narrators, it would have more effective to have clearer, more distinct voices. In writing a story Cornwell proves herself to be very capable, but she lacks a solid foundation in strong, real, individualized characters.

Nevertheless, the undercurrents of Tides made reading it worthwhile. It’s enormously satisfying to see fantasy authors doing their job: communicating important messages in a creative and engaging way. I’d recommend it to younger teens, folklore fans looking for a quick read, and bookies interested in how socially aware fantasy is being brought into the twenty-first century.

*Jennifer Vosters is a Milwaukee native and member of the Saint Mary’s College Class of 2016, graduating with an English major and minors in Theatre and Italian. She was cast in the 2016 Notre Dame Shakespeare Festival, performing in Periclesand The Tempest as part of the Young Company. She is currently reading The Rover by Aphra Behn, An Actor Prepares by Konstantin Stanislavski, and Ulysses – at least parts of it (whew!) – by her beloved James Joyce.