I’m very excited to have Barb Taub, a writer and blogger, stop by Grab the Lapels today for a “Meet the Writer” feature. I’ve been following Barb’s blog all summer, reading how “Life Begins When the Kids Leave Home and the Dog Dies,” the top ten reasons to not have kids from a serial kid producer, and Barb’s summer work/vacation in Europe that involves a lot of chaos–death in Paris, and torturing foreign drivers, for example.

What is your writing process like? Which do you favor, starting or revising?

I’m a plotter wannabe. Before I start any new project, I draw up character sheets, take the characters on practice outings, and make an outline. Then I start writing and all of that just floats off into the ether, never to surface again. Yup. I’m a total pantser. Once I’ve got most of a first draft, I like to work with one or perhaps two trusted critique partners, exchanging chapters and revising as I go. Then (and only because I’m incredibly lucky enough to have a publisher with extremely gifted editors) I send it off to Hartwood Publishing, and work with their editorial staff to do the final revise and polish. I might send shorter works and novellas to a round of beta readers before submitting to the publisher. When it comes to revising, the only way I can strike the superfluous passages (the bane of pantsers) is to very soothingly assure the deleted bits that I’m going to put them in a wonderful, safe little file (called Dead Kittens) so I can use them in my next book, but I still love them very, very much. Then I kill the little darlings and never look back.

If you could change places for a day with any one of your characters, who would it be, and why?

You couldn’t pay me to be one of my characters. I make their lives a living hell, and if I was one of my poor abused characters…one of them might be me. The revenge potential is staggering. But if I could visit with one character, it would be 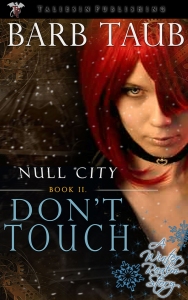 Lette’s mom from Don’t Touch. (Lette has a little problem where anything her fingers touch is turned into something else. Every day it’s a different thing, from bunnies to bubbles to bombs, and everything in between.) I like to think Lette’s mom would invite me to her house for dinner—she makes a mean pot roast—and we’d commiserate with each other about our lack of grandchildren. In the face of the completely impossible, her mom is just so normal and practical. When Lette complains that she can’t ever touch a lover because her touch will turn them into something different each day, Mom replies,

“First of all, you can touch anything you want. I read that there are more nerve endings in the lips than in the fingertips.” She pursed her own lips. “And actually, more in the clitoris than either of them.”

Why did you start a blog?

This one is easy. The absolutely amazing miracle-working editor/mentor Mary Rosenblum, the literary midwife at New Writers Interface, told me I had to get rid of the said-tags in my first book, and I had to start a blog. (I bitched, as I recall, about both. Then I bitched about her being right about both…)

In what ways has academia shaped your writing?

My parents sent us to a Catholic grammar school where the nuns had a fixation with diagramming sentences. In fifth grade, Sister Mary Latin took over and we dissected every possible speech part. For punishment of any student infraction from Original Sin to breathing on days ending in “Y”, she assigned Latin verb conjugation. Sadly, the only Latin I remember is canis meus id comedit (the dog ate it). I probably couldn’t diagram a sentence if the fate of the universe hung in the balance.  But the framework of how language is put together has stayed with me. During my first year at the University of Chicago, I met a passionate young professor named Frank Kinahan. He was teaching some required first year course I was assigned to, but he managed to work in a few lectures on his specialty, the Anglo Irish Literary Renaissance. I was absolutely hooked, and took every class he offered over the next few years. Sadly, he died tragically young, or I’m sure he would have inspired a generation of writers with his appreciation for the poetry and history of Irish mythology. Certainly he inspired me to become a writer.

What was your least favorite class at any point in your education? Why?

Calculus, my first year at university. It was taught by a Mr. Ng, who coupled a lack of vowels in his name with a lack, as far as I could tell, of any knowledge of English in any form. I only passed—barely—by calling my mother to give her the gist of each assigned homework problem. She would explain it to my engineer father, who would explain the answer. She would then translate from engineer-speak to English-lit major, and we’d be on to the next problem. Nobody involved in this process—with the possible exception of Mr. Ng, who remained incomprehensible—could speak of it again without shuddering. Finally, I met a math professor who assured me, “There’s no such thing as calculus in the real world.” Words for English majors to live by.

In what ways has life outside of academia shaped your writing?

I was supposed to be a writer, ended up a journalist, and did have a humor column that ran in local and some national newspapers back in the nineties. But a little difficulty (food, shelter, and college degrees for four offspring) steered me over to the Dark Side and a career in Human Resources. A lucky foreign acquisition of our company accompanied by an astonishingly generous golden handshake set me free just as Child #4 was finishing high school. In fabulous coincidence, my husband was offered a position at a university in England, friends rented us one tower of their medieval castle, and all of a sudden, I was a writer. I just had to write something.

What are your current writing projects?

I’ve got a new book, Round Trip Fare, coming out in early 2016, plus print reissues of the earlier books in the series. I’m now working on the fifth (and final) Null City story, an urban fantasy where I’ll get my last shot at torturing all my favorite characters. Can’t wait!

Are there aspects of your writing that readers might find challenging to them?

I suppose that would depend on the reader. The heat level isn’t at the erotic-romance sizzle, but each story has a strong romantic thread, plus I try to balance humor and snark. Maya Angelou said, “If there’s a book that you want to read, but it hasn’t been written yet, then you must write it.” So I try to think of myself as one of my readers, and write the book I want to read. But at the end of the day, I think Chuck Wendig put it best on his terribleminds blog:

“What matters is, knowing that your time on this Hurtling Space Sphere is limited, you should make an effort to live your life — and your art — the way you damn well want to. Do you really want someone to chisel the words MADE MEDIOCRE ART SHE DIDN’T MUCH LIKE BECAUSE SHE THOUGHT THAT’S WHAT SOMEONE ELSE WANTED HER TO DO on your gravestone?”